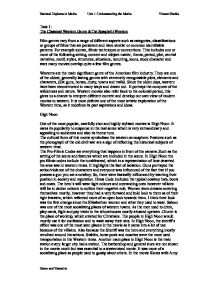 Task 1: The Classical Western Genre &The Spaghetti Western Film genres vary from a range of different aspects such as categories, classifications or groups of films that are persistent and have similar or common identifiable patterns. For example syntax, filmic techniques or conventions. This includes one or more of the following setting, content and subject matter, theme, period, plot, central narrative, motif, styles, structures, situations, recurring, icons, stock character and stars many movies overlap quite a few film genres. Westerns are the main significant genre of the American film industry. They are one of the oldest, generally lasting genres with extremely recognisable plots, elements and characters, (Six guns, horses, dusty, towns and trails). Since the olden days, western have been reconstructed in many ways and drawn out. It portrays the conquest of the wilderness and nature. Western movies also refer back to the colonial period, this gives us a chance to interpret different context and develop our own view of modern movies to western. It is most definite one of the most artistic exploration of the Western time, as it redefines its past aspirations and ideas. High Noon One of the most popular, carefully shot and highly stylised movies is High Noon .It owes its popularity to suspense in the real sense which is very extraordinary and appealing to audiences and also its theme tune. ...read more.

The Hero wins, he disdainfully looks around reaches for his tin badge, takes it ff and drops it into the dusty street and turn to leave. He not only throws way his badge but his responsibility of the people. Magnificent 7 The Story of this movie is very similar to a Chinese film called 'Seven Samurai'. A peasant village in Northern Mexico hires American gun fighters to fight off Calvera's forty thieves. Pro-filmic codes, it's a village, which is set in Mexico. There are Farmers who are dressed in white to show their innocence and no mean for harm to others .A Church, which is worn out, and old just like the rest of the village. This shows the poverty and their living standards. A pub, which is not like a saloon in the normal westerns. It was more like an open aired space, where people could sit anywhere in peace mostly outside on the terrace. Only the Magnificent 7 or the bandits used horses. Then we have the dress code of the Magnificent 7, which were all different as it reflects their individuality. Yul Brynner (Chris) is dressed in black portraying his dark past. Vin, dressed in white/ brown clothes showing more of a positive background. There are 7 heroes and one main villain with his fellow bandits. ...read more.

The theme includes death, revenge and nature. Long opening scene introducing the 3 villains and 1 hero. Villains kill McBain family except the wife who is not present. After death, the townsfolk's gather around the McBain property. Jill McBain arrives at her house seeing the people of the town surrounding the dead bodies. She swears revenge. Cheyenne is introduced as the second hero and he encounters with Jill at her house. He also meets Harmonica. They think of a plan to save the property, this links onto the showdown where eye shots are used frequently. Heroes win and the 2 villains die. Revenge comes to an end. Over the time, we have developed our understanding of movies which are very different in many ways whether it be the way the characters are introduces, how long the introductory scene is and what other things such as noises we should take into consideration. There is something in every movie, which is unique; there is always one aspect of what difference it makes to others. That is why every movie varies because they advance from each other, which develops, into a more and more altered way of viewing cinema. The Generic Conventions and themes influence the characters, plot and themes. It is what makes the movie, a movie. Without these things there wouldn't be an understanding between the features so it wouldn't flow. This develops through language, music, characterisation and classifications. National Diploma in Media Unit 1: Understanding the Media Vicrant Shabla Genre and Narrative ...read more.