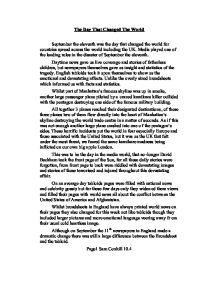 The Day That Changed The World.

The Day That Changed The World September the eleventh was the day that changed the world for countries spread across the world including the UK. Media played one of the leading roles in the disaster of September the eleventh. Daytime news gave us live coverage and stories of fatherless children, but newspapers themselves gave us insight and statistics of the tragedy. English tabloids took it upon themselves to show us the emotional and devastating affects. Unlike the overly sized broadsheets which informed us with facts and statistics. Whilst part of Manhattan's famous skyline was up in smoke, another large passenger plane piloted by a crazed kamikaze killer collided with the pentagon destroying one side of the famous military building. All together 3 planes reached their designated destinations, of these three planes two of them flew directly into the heart of Manhattan's skyline destroying the world trade centre in a matter of seconds. ...read more.

Whilst broadsheets in England have always printed world news on their pages they also changed for this week not like tabloids though they included larger pictures and more emotional language veering away from their usual cold heartless image. Although on September the 11th newspapers in England made a dramatic change there was still a large difference between the Broadsheet and the tabloid. Page1 Sam Coxhill 10.4 Language was still very different, broadsheets kept their more complex language, whilst tabloids stayed with their simple but dramatic such as this front page headline took from the Sun on the 11th of September "The Day That Changed The World". Tabloids such as the Sun also included personal stories like the "body rained from the sky" article which speaks of personal experience during the disaster, unlike broadsheets which only wrote about hard facts. ...read more.

It seems from the evidence I have, tabloid newspapers are far more popular than the less commercial and celebrity based broadsheet, as only 2.3% of the newspaper readers read the Guardian. Altogether on an every day basis the Sun newspaper doesn't usually contain world news, it is a national newspaper and prints national news. It is highly celebrity involved and uses basic but sensational language. It also contains a lot more sport involvement which is usually celebrity based rather than statistics and league tables. However, the guardian usually contains national and world news mostly political and financial, the Guardian does not contain much sport and the only sport it does contain is very simple including facts and league tables absolutely no celebrity involvement. Therefore, on September 11th these two genre's of newspapers changed in two very different ways maybe the tabloid shifting in a more dramatic way. Page 2 Sam Coxhill 10.4 ...read more.