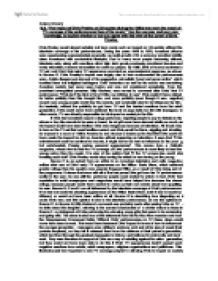 &quot;The impact of Elvis Presley on US society during the 1950s was more the result of TV coverage of his performances than of his music.&quot; Use the sources, and your own knowledge, to explain whether or not you agree with this view.

Q.6. "The impact of Elvis Presley on US society during the 1950s was more the result of TV coverage of his performances than of his music." Use the sources, and your own knowledge, to explain whether or not you agree with this view of the career of Elvis Presley. Elvis Presley would almost certainly not have made such an impact on US society without the television coverage of his performances. During the years 1945 to 1970, American citizens were experiencing unprecedented prosperity, as rapid growth of the economy provided middle-class Americans with comfortable lifestyles. Due to many more people becoming affluent, television sets, along with countless other high-tech goods previously considered luxuries and rarely affordable, became necessities for ordinary people. By 1960, 90% of homes contained a TV set, and Elvis' first major TV appearance provoked an unprecedented response, as shown in Source B. Elvis Presley's impact was largely due to how controversial his performances were. Adults disapproved strongly of his suggestive, animalistic "grunt and groan antics", which horrified them but delighted teenagers. Elvis' behaviour as well as his music was something American society had never seen before and was not considered acceptable. Even the prominent evangelical preacher, Billy Graham, was moved to comment after Elvis' first TV performance: "Elvis isn't the kind of boy I'd like my children to see". ...read more.

It shows that even with all of the bad press Elvis got from his TV performances earlier in the year, he was still the performer people most wanted to watch. In fact, Elvis' bad reputation in adult newspapers and magazines would have helped him increase the shows ratings, because people would have wanted to make up their own minds about how appalling he was. Source B, C and E are all influenced by the television coverage of Elvis' performances. If he had not made his shocking appearance on the Milton Berle Show, both B and C would be different, or would not have been written at all. Source B is describing how disgusting and crude Elvis was, and this opinion is due to his television performance, as are the opinions in Source C. In Source G, Billy Graham's comment was probably made after seeing Elvis on TV - he talks about his daughter, referring to the scenes broadcasted of a similar nature to those in Source F, a photograph of Elvis performing live showing young girls that seem to be screaming and going wild. The same is also true of the statement from the Ku Klux Klan member and from the Congressman Emmanuel Celler. ...read more.

Also, the fact that Elvis was then booked shortly afterwards to appear on a TV programme (which would have been done to boost ratings) shows he was already successful. Despite having this early success, TV does appear to be mainly responsible for Elvis' impact, as Source H shows that in 1956, the year Elvis first started appearing on TV, four of the top five selling singles that year were by him, whereas the year before none were his, even though he had been a recording artist and professional live performer since 1954. In conclusion, Elvis Presley's impact on society in the 1950s was more the result of TV coverage of his performances than of his music. Elvis attracted many young people because of how controversial he was - because "he looks so mean" and "he peddles dope" (these explanations of his charm disgusted and worried parents). His shocking nature would never have been revealed to the older generation however without his TV appearances. As well as this TV made it impossible for adults to control what teenagers were exposed to: parents could have stopped their children from going to see Elvis, but it would have been harder to the broadcasts being sent directly into their own homes, that were so outrageous to the old and appealing to the young. Alistair Divorty ...read more.