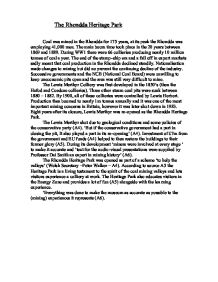 The Rhondda Heritage Park Coal was mined in the Rhondda for 175 years, at its peak the Rhondda was employing 41,000 men. The main boom time took place in the 20 years between 1869 and 1889. During WW1 there were 66 collieries producing nearly 10 million tonnes of coal a year. The end of the stamp-ship era and a fall off in export markets sadly meant that coal production in the Rhondda declined steadily. Nationalisation made changes to mining but did no prevent the continuing decline of the industry. Successive governments and the NCB (National Coal Board) were unwilling to keep uneconomic pits open and the area was still very difficult to mine. The Lewis Merthyr Colliery was first developed in the 1850's (then the Hafod and Coedcae collieries). Three other steam coal pits were sunk between 1880 - 1882. By 1900, all of these collieries were controlled by Lewis Herbert. Production then boomed to nearly 1m tonnes annually and it was one of the most important mining concerns in Britain, however it was later shut down in 1983. Eight years after its closure, Lewis Merthyr was re-opened as the Rhondda Heritage Park. ...read more.

Unfortunately, health and safety regulations meant that the return to the surface was not realistic and I found it cheesy and boring, but if a younger group went I'm sure they'd enjoy it (mysterious and unforgettable B2) and will interest them as 'school kids' (B3). Community Life The Village Street is an exhibit that shows shops from the 1920's such as, butchers, general store, household store, clothes and shoe shops and general exhibits. There were many consumer products available e.g.: - a vacuum however there were many pawnbrokers receipts (with people pawning their own clothes for money) which is evidence that there was poverty in the area. The shops inside were quite cramped and dirty, full of produce and informative text boards. Although the boards contained a lot of information they were very long and didn't hold the visitor's attention. It could benefit by having interactive people talking to the visitors to make it more realistic, St Fagans has this and is a more enjoyable experience because of this. It creates a more authentic atmosphere and allows the visitors to ask questions if needed. The Rhondda Heritage Park Leaflet said we could 'explore the domestic and commercial aspect of valleys life' and see 'unusual room sets' (C1), in ...read more.

This section was probably less of an attraction than the Miners Work as it did not include the underground tour but may have included more information using displays, videos and props. The tour guide on the underground tour is interesting and accurate (containing similar information as B6) but it soon become cheesy as explained in D2 when the models are lit up and fake explosions sound. The cage on the tour only goes down a very small depth and this seems unrealistic and disappointing. However, the tour-guide informed me that the real mine had now become flooded and infested. This made it impossible and dangerous to enter and safety regulations would definitely not allow this. The Big Pit uses the original mine and because of this they need to follow all of the safety precautions exactly, they also spend a lot of money on pumping out unwanted water. The Big Pit would be more authentic because of this and The Rhondda Heritage Park does not have that detail (D2). The Rhondda Heritage Park needs to use their models, sounds effects and colours, as they need to attract visitors and tourists to obtain income. They also provide 'fun' for all ages (A5) and for extra income attract school children (B3). ...read more.