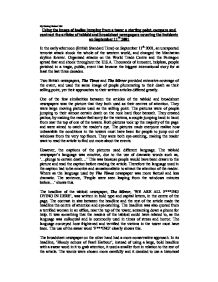 Using the image of bodies jumping from a tower as a starting point, compare and contrast the articles of tabloid and broadsheet newspapers covering the incidents on September 11th 2001.

By Balraj Sohal 10r Using the image of bodies jumping from a tower a starting point, compare and contrast the articles of tabloid and broadsheet newspapers covering the incidents on September 11th 2001 In the early afternoon (British Standard Time) on September 11th 2001, an unexpected terrorist attack shook the whole of the western world, and changed the Manhattan skyline forever. Organised attacks on the World Trade Centre and the Pentagon spread fear and shock throughout the U.S.A. Thousands of innocent, helpless, people perished in a tragic, public, event that became the biggest international story for at least the last three decades. Two British newspapers, The Times and The Mirror provided extensive coverage of the event, and used the same image of people plummeting to their death as their selling point, yet their approaches to their written articles differed greatly. One of the few similarities between the articles of the tabloid and broadsheet newspapers was the picture that they both used as their centres of attention. They were large moving pictures used as the selling point. The pictures were of people jumping to their almost certain death on the rock hard floor beneath. They created pathos, by making the reader feel sorry for the victims, a couple jumping hand in hand from near the top of one of the towers. Both pictures took up the majority of the page and were aimed to catch the reader's eye. ...read more.

Therefore they can read the complex, narrower paragraphs easier. Broadsheet readers usually read articles the whole way through, therefore broadsheet articles are set out more like stories, where as tabloid readers do not generally read articles the whole way through, largely because tabloids use highly repetitive pyramid writing. There was also a contrast between the languages that the two newspapers used in the articles. The words used by the tabloid newspaper were shorter, common and less complex, compared to those that the broadsheet paper used. This is because the readers of the tabloids are generally assumed to be less educated and not as intelligent as the readers of broadsheet newspapers. The Times used much more complicated words, such as, 'apocalyptic' and 'disintegrated'. The Mirror also used a lot of hyperbolic and emotive language. For example, '...unimaginable horror...' and '...fireball explosions ripped through the symbol of America...' This was generally used at the beginning of the piece, to keep the person reading interested in the article and to make them read more and more. The use of this technique made the article almost like a narrative and got the reader involved, as though they were in it. However the broadsheet paper didn't use the emotive and sensationalistic language as much, as broadsheet writing is generally more factual and informative, trying to give an accurate an account as possible of the event being covered. ...read more.

and tried to give a detailed, accurate account of what happened on that fateful day, and so allowing the readership to make up their own mind about the incidents. It tried to give a balanced view, but as in both articles, the reader cannot help having sympathy for those who perished and those who lost loved ones in those tragic circumstances, after reading the articles. However, The Mirror is less informative and much more biased than The Times because of the words and phrases it uses. For example, 'Someone needs to take responsibility for this, that was somebody's father...mother...sister...' Although the articles contrasted in so many ways, I believe that the articles were still trying to put the same message across tot their readership. This was that, although America is a superpower it is still vulnerable to attack, and the world was shown this. Security needs to be stepped up to stop terrorism and everyone needs to take threats very seriously. After analysing both articles, I didn't really prefer any. I thought that The Mirror article was more shocking due to the use of sensationalistic and emotive language and provided a detailed eyewitness account of the scenes in New York, but I thought that The Times was very informative and gave a detailed balanced opinion of what happened, without altering the reader's views. It was also interesting to find out what the leading political figures thought of the attacks and what how everyone would retaliate. ...read more.