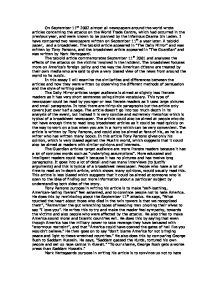 Comparison of a tabloid and broadsheet front page written on September 11th 2002.

On September 11th 2002 almost all newspapers around the world wrote articles concerning the attacks on the World Trade Centre, which had occurred in the previous year, and were known to be planned by the infamous Osama bin Laden. I have compared two newspapers written on September 11th a year later. A tabloid paper, and a broadsheet. The tabloid article appeared in "The Daily Mirror" and was written by Tony Parsons, and the broadsheet article appeared in "The Guardian" and was written by Mark Hertsgaard. The tabloid article commemorates September 11th 2001 and analyses the effects of the attacks on the victims involved in the incident. The broadsheet focuses more on America's foreign policy and the way the American citizens are treated by their own media who are said to give a very biased view of the news from around the world to its public. In this essay I will examine the similarities and differences between the articles and how they were written by observing the different methods of persuasion and the style of writing used. The Daily Mirror articles target audience is aimed at slightly less literate readers as it has very short sentences using simple vocabulary. This type of newspaper could be read by younger or less literate readers as it uses large pictures and small paragraphs. In total there are thirty-six paragraphs but the article only covers just over half a page. The article doesn't go into too much depth in its analysis of the event, but instead it is very concise and extremely rhetorical which is typical of a broadsheet newspaper. ...read more.

He uses contrast as a device to prove to the reader that America is a better place to live in than any Islamic country, which is intended to convince the readers that America is more ethical. He does this by contrasting the reaction in America to the reaction in Palestine after the attacks. He tries to show the reader that America is morally right by saying Americans thought that it was an "abomination" while Palestinians were "dancing in the street". He also shows that Islamic countries are evil by contrasting Saddam Hussein's real image with the image he projects. He says that Saddam Hussein "tortured his own people" but tries to give a friendly image by saying that he "likes Quality Street". He speaks to the reader in first person as an effective way to bring his own feelings to the article, for example when he says, "I love America". He also speaks in first person to make the article more personal when he says, "It turns my stomach". Tony Parsons uses mainly simple vocabulary in the article, which is aimed at his audience, the daily mirror readers, although he does use a mix of complex and simple vocabulary in some cases such as "meticulously planned slaughter". Tony Parsons uses sarcasm in the article to show that the victims were innocent. He compares them to the complaint of the "tourists" who couldn't get a trial at Camp X-Ray, and uses sarcasm by saying, "Pass the Kleenex". He does this to show his anger at the people who are sympathetic towards the terrorists (some who are wrongly accused), and to make them appear guilty by saying that their problems are not as important as the victims of the 9/11 attacks. ...read more.

The headline for the "Guardian" article says, "Why we still don't get it, one year on" in large bold letters. The headline is large compared to the writing and does stand out, but not as much as the "Mirror" headline. The headline is used to make the reader want to read the article because it is vary vague. It would make the reader want to find out what the article is about. Underneath the headline is a sub-heading, which says, "Americans are badly served by semi-official propaganda". This is slightly smaller than the headline and gradually brings the reader down to the article. It also progressively gives the reader more information about the article. There are only twelve paragraphs in the article but they are very long and the article is fairly large. The sentences are also large and use complex words. This is designed for readers who are fairly literate. This is typical of a broadsheet newspaper. The article also has no pictures, which makes it dull. It is not very eye-catching and this is also typical of a broadsheet. In the middle of the article a sentence is highlighted in large bold lettering which says " September 11 is also the date of the US-backed coup against a democratic Chile". This is eye-catching and shows the reader facts about America's foreign policy, which is designed to make you want to read the article. At the end of the article there is information written about Mark Hertsgaard. It includes books that he has written and his occupation. I think this is important because it illustrates that a professional journalist and author wrote the article about this subject and that he can be trusted to make his assumptions. ?? ?? ?? ?? ...read more.