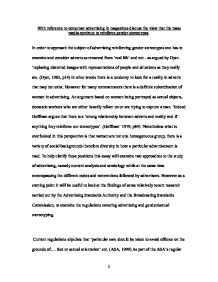 With reference to consumer advertising in magazines discuss the view that the mass media continue to reinforce gender stereotypes.

With reference to consumer advertising in magazines discuss the view that the mass media continue to reinforce gender stereotypes. In order to approach the subject of advertising reinforcing gender stereotypes one has to examine and consider adverts as removed from 'real life' and not - as argued by Dyer- 'replacing distorted images with representations of people and situations as they really are. (Dyer, 1982, p14) In other words there is a tendency to look for a reality in adverts that may not exist. However for many commentators there is a definite subordination of women in advertising. An argument based on women being portrayed as s****l objects, domestic workers who are either heavily reliant on or are trying to capture a man. 'Indeed Goffman argues that there is a 'strong relationship between adverts and reality and if anything they reinforce our stereotypes'. (Goffman' 1979, p84) Nonetheless what is overlooked in this perspective is that women are not one homogeneous group, there is a variety of social backgrounds therefore diversity in how a particular advertisement is read. To help clarify these positions this essay will examine two approaches to the study of advertising, namely content analysis and semiology while at the same time encompassing the different codes and conventions followed by advertisers. However as a starting point it will be useful to look at the findings of some relatively recent research carried out by the Advertising Standards Authority and the Broadcasting Standards Commission, to examine the regulations covering advertising and gender/s****l stereotyping. ...read more.

By stating this Sumner is suggesting that as social beings we bring with us, in our interpretation of adverts certain values and belief systems- albeit learned- depending on social background resulting in an assumption that viewers are unable to see anything other than what is in front of them. It is true that advertisers would agree there exists within adverts a preferred reading, however that may not be how the viewer interprets it. This preferred reading also allows the viewer to disagree and possibly take offence at the message being promoted intentionally or otherwise. Another criticism aimed at this method, is that it assumes women are part of a homogeneous group and that they share a common idea of how women in particular should be represented in advertising. This criticism has also been levelled at feminist research and brings to the fore debates on positive imagery. However when considering feminist interpretations of gender stereotyping it is worth bearing in mind that although this movement wish to see a fairer more positive representation of women in advertising the question of whose ideology of fairness would be represented. Nonetheless being able to establish gender stereotyping within advertising is, as many commentators would argue going to take more than counting the times an image is represented. Indeed Leiss suggests that within content analysis of advertising 'the real weakness may lie in the use of denotative-what you see- measurement as opposed to connotation-what you infer-and its many levels of meaning', as used in many of today's picture adverts. ...read more.

Indeed akin to a hypodermic model whereby people are injected-metaphorically speaking- with information that does not get processed and comes out exactly as it went in. Gender stereotyping in advertising is therefore very subjective in that whatever way we measure and analyse the subject it must be stressed that we have the ability to disagree with any message that is conveyed by advertisers. Through the use of semiotics we can build up a picture of what is behind the images we are confronted with. By the same degree content analysis can give one the idea that the result is conclusive. However no method is perfect and in the same way it can be useful it can also be misleading as has been shown above. When one is also faced with the argument of ideology within advertising it is akin with all aspects of social life. It is true to say we follow rules and regulation in our every day social lives that may constrain some of our actions, in the same way that advertisers are constrained by bodies such as the BSC. However in the same way we are constrained, we are also protected by the same ideology, therefore we have some powers available to disagree with, contest and challenge messages or actions deemed unfair or stereotypical. As a result it is difficult to establish whether adverts reinforce gender stereotypes or if indeed we do that perfectly well for ourselves. ...read more.