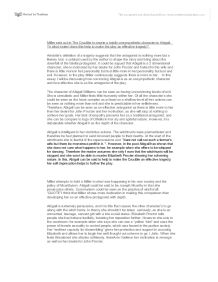 Miller sets out in The Crucible to create a totally unsympathetic character in Abigail. To what extent does this help to make the play an effective tragedy?

Miller sets out in The Crucible to create a totally unsympathetic character in Abigail. To what extent does this help to make the play an effective tragedy? Aristotle's definition of a tragedy suggests that the antagonist is nothing more but a literary tool, a catalyst used by the author to shape the story and bring about the downfall of the fateful protagonist. It could be argued that Abigail is a 2 dimensional character; she is motivated by her desire for John Procter and hatred for his wife and there is little more in her personality but lust little more in her personality but lust and evil. However, in the play Miller continuously suggests there is more to her. In this essay I will be discussing how convincing Abigail is as an unsympathetic character and how effective she is as the antagonist of the play. The character of Abigail Williams can be seen as having unconvincing levels of evil. She is unrealistic and Miller finds little humanity within her. Of all the character's she could be seen as the least complex as at least on a shallow level all her actions can be seen as nothing more than evil and she is predictable in her selfishness. Therefore, Abigail can be seen as an effective antagonist as there is little more to her then her desire for John Procter and her motivation, as she will stop at nothing to achieve her goals. ...read more.

She is an orphan, and has seen her "parents heads smashed" on the pillow next to hers, an experience likely to disturb anyone. She doesn't seem to trust her friends, they are more like minions who do her bidding out of fear. Therefore, the only person she truly felt she could trust was John Procter, who betrays her. "That's done with" Furthermore. I find it possible to have the same amount of sympathy with Abigail Williams as the protagonist, John Proctor. There is a strong theme of betrayal an abuse of trust: he was her employer and he has sex with her, he abuses his wife's trust and he lastly betrays her trust in refusing to continue their romantic affair. Abigail is continuously represented as a silly teenager, both in her need to rebel and her jealous, obsessive crush on John Procter, therefore, despite her actions she is vulnerable and alone, with no trusting relationship or role model. According to Aristotle, the antagonist opposes the protagonist, however Abigail desires the antagonist "I know you". Despite their conflict, John Procter and Abigail have many similarities in their aims. Both of them want something more than the Puritan society can offer them, John Procter is dissatisfied with the church and his home life, and Abigail seeks freedom and a trusting relationship. ...read more.

me John Proctor, and whatever sin it is, you love me yet" -predictable in her selfishness -spite Offers to be whipped, shows she does not care for herself, self deprivating In conversation Mary Warren pleads with Abigail to "tell the truth" and that she'll "only be whipped for dancin', and the "dare not call out such a farmer's wife but there be monstrous profit in it. " In this case, during the late 1600's women were defined by the success of their marriage, the obedience of their children, and the cleanliness and extent of their home. Abby does not apply to this The salem witch trials could be said to be a pivotal point in the puritan society, respect for women -he is blackening my name in the village! She is telling lies about me!" Elizabeth is calling her a hoe, lowering her status even more -acts superior, has a endless capacity for dismembering, how much of her front is a lie? She seems terrified underneath -antagonist, someone who opposes the protagonist. Abby desires the protagonist Miller must want her to have some character, due to including her history, contrast to mercy lewis, a one sided, evil character Good job as an antagonist, shapes course of the play, brings protagonist to death Similarities in john and abby...if told from abbys view could john be antagonist Is john right? ...read more.