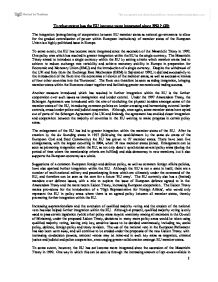 To what extent has the EU become more integrated since 1992?

To what extent has the EU become more integrated since 1992? (20) The integration (strengthening of cooperation between EU member states as national governments to allow for the gradual centralisation of power within European institutions) of member states of the European Union is a highly politicised issue in Europe. To some extent, the EU has become more integrated since the ascension of the Maastricht Treaty in 1992. One policy area which has resulted in greater integration within the EU is the single currency. The Maastricht Treaty aimed to introduce a single currency within the EU by setting criteria which member states had to achieve to reduce exchange rate variability and achieve monetary stability in Europe in preparation for Economic and Monetary Union (EMU) and the introduction of a single currency. Despite the withdrawal of the UK and Italy from the Exchange Rate Mechanism (ERM) in September 1992, it did lead successfully to the introduction of the Euro into the economies of eleven of the member states, as well as successive intakes of four other countries into the 'Eurozone'. ...read more.

After its creation by the six founding states in 1957 (following the establishment by the same six states of the European Coal and Steel Community) the EU has grown to 27 member states. There have been five enlargements, with the largest occurring in 2004, when 10 new member states joined. Enlargement can be seen as promoting integration within the EU, as not only does it synchronise several policy areas (during the period of time where the membership criteria are fulfilled) and aids democracy in new members, but it also supports the European economy as a whole. Suggestions of a common European foreign and defence policy, as well as common foreign affairs policies, have also sparked further integration within the EU. Although the EU is not a state in itself, there are a number of multi-national military and peacekeeping forces which are ultimately under the command of the EU, and therefore can be seen as the core for a future 'EU army'. ...read more.

Lisbon Treaty: with increasing co-decision powers, national vetoes may be removed in such key areas as migration, criminal justice and judicial and police cooperation, encouraging greater collaboration amongst EU member states. To some extent, however, the EU has not become more integrated since the ascension of the Maastricht Treaty in 1992. One way in which this can be seen is through the increasing amount of opt-outs available in certain policy areas. In general, EU law is valid in all 27 EU member states; however, occasionally member states negotiate certain opt-outs from areas of certain treaties of the EU, meaning they do not participate in the common structure in these fields. The most significant opt-outs have included Denmark, Sweden and the UK's opt-outs of the single currency; and the UK and Ireland's opt-out of the Schengen Agreement. These opt-outs have hindered integration within the EU, providing for a two-speed Europe by allowing closer cooperation between countries wanting to forge ahead on certain area and leaving others behind. ?? ?? ?? ?? 1 ...read more.