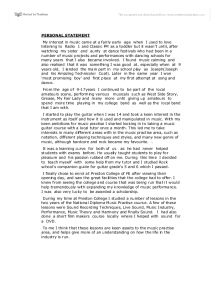 PERSONAL STATEMENT My interest in music came at a fairly early age when I used to love listening to Radio 1 and Classic FM as a toddler but it wasn't until, after watching my sister and aunty at dance festivals who had been in a number of music projects and performances with dancing schools for many years that I also became involved. I found music calming and also realised that it was something I was good at, especially when at 9 years old, I landed the main part in my school play as Joseph(Joseph and his Amazing Technicolor Coat). Later in the same year I won 'most promising boy' and first place at my first attempt at song and dance. From the age of 9-17years I continued to be part of the local amateurs scene, performing various musicals such as West Side Story, Grease, My Fair Lady and many more until ...read more.

During this time I decided to teach myself with some help from my tutor and I studied Rock school's companion guide for guitar grade's 5 and 6 which I passed. I finally chose to enrol at Preston College of FE after viewing their opening day, and saw the great facilities that the college had to offer. I knew from seeing the college and course that was being run that it would help tremendously with expanding my knowledge of music performance. I was also very lucky to be awarded a scholarship. During my time at Preston College I studied a number of lessons in the two years of the National Diploma Music Practise course. A few of these lessons were Sound Recording Techniques, Live Sound, Music Industry, Performance, Music Theory and Harmony and finally Sound. I had also done a short film makers course locally where I helped with sound for a DVD. ...read more.

I also took my grade 8 guitar with Rockschool and Grade 3 Drums privately during my time at college. Last summer I took a weeks holiday in London so that I could attend a summer school at Tech Music school for which I received a glowing report. After the first year at college, I helped a small group of teenagers at Stages in Morecambe who wanted to form their own bands. As well as playing at various venues in the North West of England with my band. I am a keen student who is looking forward to taking that next step in the ladder to higher education, I am looking forward to a new set of challenges and opportunities within university life. Having been in many different roles within my National Diploma course I am looking forward to elaborating them, and continue studying towards my ambition of a career within the music business. ?? ?? ?? ?? ...read more.