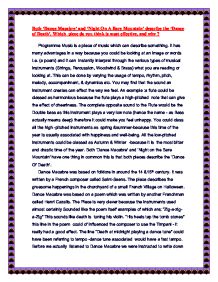 Both 'Dance Macabre' and 'Night On A Bare Mountain' describe the 'Dance of Death'. Which piece do you think is most effective, and why ?

Both 'Dance Macabre' and 'Night On A Bare Mountain' describe the 'Dance of Death'. Which piece do you think is most effective, and why ? Programme Music is a piece of music which can describe something. It has many advantages in a way because you could be looking at an image or words I.e. (a poem) and it can instantly interpret through the various types of musical instruments (Strings, Percussion, Woodwind & Brass) what you are reading or looking at. This can be done by varying the usage of tempo, rhythm, pitch, melody, accompaniment, & dynamics etc. You may find that the sound an instrument creates can effect the way we feel. An example :a flute could be classed as harmonious because the flute plays a high-pitched note that can give the effect of cheeriness. The complete opposite sound to the Flute would be the Double bass as this instrument plays a very low note (hence the name - as Bass actually means deep) ...read more.

I also expected to hear woodwind (the Flutes, Bassoons, Oboes etc...) being played because the poem line "The Winter wind whistles and the Lime-trees moan", made me think of woodwind instruments because Woodwind is associated with blowing in order to produce the instrument's sound. When I actually heard Dance Macabre it was similar to how I imagined it to sound like. The piece was firstly introduced by the Strings being played (Harp + Violin ) then the Timpani was played to represent the heels tapping the tomb stones. Towards the middle of the piece Woodwind was used to symbolise the Winter wind whistling. When the Skeletons were introduced I was expecting to hear the Double Bass being played as it would of created a creeping up on you effect. In actual fact the skeletons were represented by the Xylophone this is very clever because you could visualize the clattering of bones from the Skeletons dancing just by hearing the Xylophone. ...read more.

At the ending of the piece Woodwind was used to represent mourning the Clarinet was firstly played but the Flute took over because it had a softer timbre. It had a great effect as it sounded peaceful yet sad .The Harp was also played at the end. As Death was not present in the ending, the piece sounded less dramatic than before. Overall I think the piece which was most effective at describing the Dance of Death to me would almost certainly be Night On The Bare Mountain. The reason being is that it made me feel more danced to death than Dance Macabre this was because it had a great usage of Dynamics, pitch, accompaniment and most importantly tempo. When Death and the Spirits were introduced the piece got really dramatic and full of life. This alone made me choose Night On The Bare Mountain as the most effective piece. Dance Macabre did not really sound like much of a dance tune it sounded more soft not lively although there were some dramatic peaks in Dance Macabre, I preferred Night On The Bare Mountain. By Sarah Geary ?? ?? ?? ?? ...read more.