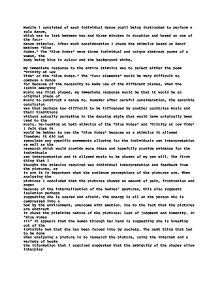 Module 1 consisted of each individual dance pupil being instructed to perform a solo dance, which was to last between two and three minutes in duration and based on one of the four-dance stimulus.

Module 1 consisted of each individual dance pupil being instructed to perform a solo dance, which was to last between two and three minutes in duration and based on one of the four- dance stimulus. After much consideration I chose the stimulus based on Henri Matisse "Blue Nudes." The "Blue Nudes" were three individual and unique abstract poses of a woman, the body being blue in colour and the background white, My immediate response to the entire stimulus was to select either the poem "Trinity at Low Tide" or the "Blue Nudes." The "Four elements" would be very difficult to compose a dance for because of the necessity to make use of the different planes, when the Isshin Emerging music was first played, my immediate response would be that it would be an original piece of music to construct a dance to. However after careful consideration, the sensible conclusion was that perhaps too difficult to be influenced by another countries music and their traditions without actually partaking in the dancing style that would have originally been used to the music. Re-looking at both stimulus of the "Blue Nudes" and "Trinity at Low Tide" I felt that it would be better to use the "Blue Nudes" because as a stimulus it allowed freedom; it did not speculate any specific movements allowing for the individuals own interpretation as well as the research which would provide more ideas and hopefully provide evidence for the individuals own interpretation and it allowed music to be chosen of my own will. ...read more.

Motifs are very important to a dance; a motif is a gesture of phrase, which embodies the style, and intention of the dance that one wishes to create. For my dance I chose to use the Matisse "Blue Nudes" for the actual motif of my dance, as they embodied what the dance was actually about. There are many ways to develop a motif, this is called motif development and there were many ways which I developed the motifs in my dance, such as the use of altering the speed in which the motifs are performed having sustained poses and sudden changes of the poses, changing the body parts used and altering the level in which the motif was performed for example I used the Matisse "Blue Nudes" poses using my knees on a middle level, standing up on a high level and laying down on a low level, the emphasis on the timing and rhythm was used when there were changes in the music, so one pose became more dominant than the other and the use of fragmentation when I would only use "Blue Nudes I" for example. The use of motif development allowed the audience to interpret what was being performed, placing emphasis on the Matisse pictures, which embodied the style of my dance. The choreographed dance was to be performed in a dance studio; however this did create a few problems because I had choreographed most of the moves in a smaller space at home, it now meant that the dance had to be adjusted to fit the proxemics of the dance studio. ...read more.

I lacked a certain element in strength when I had to rely on my back to pull me up from a bridge rather than my stomach muscles. The co-ordination of my body and my mind moving simultaneously is not very good, as it appears that I often think of something else rather than concentrating on dance which is my main fault, and my memory is appalling during these times such as when I could never remember the start if my dance and therefore I need to concentrate more in the future. The main development came from the feedback from both my teachers and my peers. Using blocking from my teacher I was able to successfully conclude that perhaps I had placed too much emphasis on the narrative side of showing emotions that I had done on the idea of cubism that Matisse was displaying. Although there were many moves that I liked, they had to be changed for a cubism style. Once this had been done by dance could be divided into three sections which is shown on the time-line underneath. Throughout the whole of this dance stimulus mock, I have learnt how to successfully use my body to demonstrate the meanings of the pictures using both my technical and physical skills. This experience has taught me how to use criticism to develop my dance and overall I think that it has been one of my best performances to date, and a successful mock module 1. ...read more.