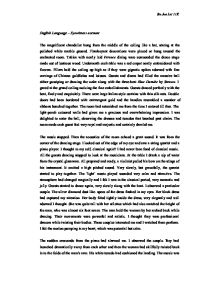 English Language - Eyewitness account The magnificent chandelier hung from the middle of the ceiling like a bat, staring at the polished white marble ground. Flamboyant decorations were placed or hung around the enchanted room. Tables with neatly laid Versace dining ware surrounded the dance stage made out of lustrous wood. Underneath each table was a red carpet neatly embroidered with flowers. Pillars held the ceiling up high as if they were gigantic spikes adorned with fine carvings of Chinese goldfishes and lotuses. Guests and diners had filled the massive hall either gossiping or dancing the waltz along with the three-beat Blue Danube by Strauss. I gazed at the grand ceiling noticing the fine embellishments. Guests danced perfectly with the beat, finely and exquisitely. There were large Italian style curtains with thin silk nets. Double doors had been bordered with extravagant gold and the handles resembled a number of ribbons bunched together. The room had astonished me from the time I entered till then. The light-peach coloured walls had given me a gracious and overwhelming impression. I was delighted to enter the hall, observing the dresses and tuxedos that brushed past chairs. ...read more.

She was quite tall with her stilettos which had also matched the height of the man, who was almost six foot seven. The man held the woman by her arched back while dancing. Their movements were powerful and artistic. I thought they were professional dancers while twisting their bodies. These couples interested me and I watched them perform. I felt the motion pumping in my heart, which was potential but calm. The sudden crescendo from the piano had alarmed me. I observed the couple. They had launched dramatically away from each other and then the woman had skillfully twisted back in to the folds of the man's arm. His white tuxedo had cushioned the landing. The music was sharp and dominant like ice being shattered repetitively. It was like a sudden burst of flames, energetic and explosive. The woman shook her breast as if she was to arouse the man. She lifted her right leg. The man gently held her leg while she laid her arm around the his neck. The woman's foot was dragged smoothly along the glossy wooden floor as the man 'slurred' back. They looked in each other's face. It seemed like they were going to kiss. ...read more.

The ambience of the room was very romantic and courageous. The piano was played forte. With one quick movement, the man turned the lady around while she looked back seriously. There was a diminuendo with the piano while the quartet played a decrescendo. At the same time, the lady's swift movements was around the man, slowly taking big steps around him as if a tape was being played slowly. With an unexpected resonance, the romantic atmosphere had died out. There was disappointment from everyone. The two stood gazing in to each other's eyes. Affectionately they held each other tightly posing in front of their well mannered audiences. Although it was short, the pair had astounded everyone with their tender and hasty rhythms. This experience of listening potential but romantic music along with a "perfect" dance was divine and heavenly. From that moment, I wanted to dance with similar elegance like a floating feather. Dancing is a spectacular and breathtaking activity. Like this experience, I have started to learn how to appreciate tango dancing and fine music. Afterwards, I found out that they were from England, but had never took any dance lessons. Since then, I have still been wondering how they danced so well. ?? ?? ?? ?? Siu Jun Lai 11K ...read more.