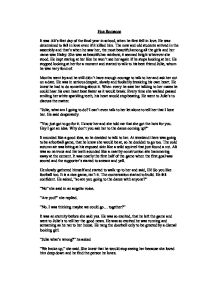 Fine Romance It was Ali's first day of the final year in school, when he first fell in love. He was determined to fall in love even if it killed him. The new and old students arrived in the assembly and that's when he saw her, the most beautiful among all the girls and her name was Haley. She was as beautiful as rainbow, it seemed bright wherever she stood. He kept staring at her like he won't see her again if he stops looking at her. He stopped looking at her for a moment and started to talk to his best friend Julie, whom he was very fond of. Months went by and he still didn't have enough courage to talk to her and ask her out on a date. He was in serious despair, slowly and foolishly breaking his own heart. He knew he had to do something about it. When every he saw her talking to her mates he could hear his own heart beat faster as it would break. ...read more.

So you like football too. It is a nice game, isn't it. The conversation started to build. He felt confident. He asked, "so are you going to the dance with anyone?" "No" she said in an angelic voice. "Are you?" she replied. "No. I was thinking maybe we could go... together?" It was an eternity before she said yes. He was so excited, that he left the game and went to Julie's to tell her the good news. He was so excited he was running and screaming as he ran to her house. He rang the doorbell only to be greeted by a dismal looking girl. "Julie what's wrong?" he asked "We broke up," she said. She knew that he would stop seeing her because she loved him deep down and he find the person he loves. Ali couldn't help but to give her a hug and try to console her. He began to see the tears form in her eyes and eventually run down her face and slide in to the corner of her mouth. ...read more.

I still can't believe she said yes". Julie said, Yeah me too. I'm so happy for you Ali and I hope that everything goes alright." Ali and Julie arrived at the dance and right away he started looking for her. He found her after a little while. She was sitting on one side waiting for him. They talked for a little while. The music was fast and they started to dance. At the end the music slowed down and they danced close together. Everyone changed partners, then Ali and Julie. Both started to dance, with other people at first Ali hesitated and later on he felt something in his heart and thought to himself that why Julie was crying when she said we broke up. He realised that it was Julie that he was looking for not Haley. It took him by shock because his friendship with Julie from the Primary school to the end of High school was nothing like the feeling he had for her right now. He was further a field looking for something, which was so closed to him in his entire life. He took Julie to the side and told her straight away, that she was the one that he was looking for not Haley. ...read more.