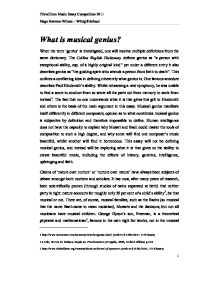 What is musical genius?

What is musical genius? When the term 'genius' is investigated, one will receive multiple definitions from the same dictionary. The Collins English Dictionary defines genius as "a person with exceptional ability, esp. of a highly original kind" yet under a different entry it also describes genius as "the guiding spirit who attends a person from birth to death". This outlines a conflicting idea in defining inherently what genius is. One famous anecdote describes Paul Hindemith's ability. Whilst rehearsing a new symphony, he was unable to find a score to conduct from so wrote all the parts out from memory to work from instead1. The fact that no one understands what it is that gives this gift to Hindemith and others is the basis of the main argument in this essay. Musical genius manifests itself differently in different composers; opinion as to what constitutes musical genius is subjective by definition and therefore impossible to define. Human intelligence does not have the capacity to explain why Mozart and Bach could master the tools of composition to such a high degree, and why some will find one composer's music beautiful, whilst another will find it horrendous. ...read more.

is a composer who is acknowledged by many to be a British genius yet who did not believe in a divine entity which supplied him with his excellent musicianship. It was Albert Einstein himself who said that 'as an artist, or a musician, Mozart was not a man of this world'12 but whilst faith offers many answers to many questions for many people, it does not hold the conclusive proof which genetics offers. Whilst Freeman Dyson did not inherit the passion for music his father possessed, it is not surprising that he didn't end up working in a laborious non-intellectually stimulating job. This is because music and intelligence go hand in hand, and Dyson may have inherited more than we think. The enigma in Elgar's Enigma Variations is something that has always been highly disputed. Elgar himself stated that the theme "went with" another melody and was not immediately noticeable in listening13. Analysts have discovered mathematical functions within the enigma theme. If we take the first seven bars of the enigma theme: (source: http://upload.wikimedia.org/wikipedia/commons/d/d2/Enigma_theme.png) we can identify some noticeable features which portray Elgar not only as a musician but also a mathematician. ...read more.

Music can be explained and described using scientific reasoning, but this does not make musicality also analytical; what gives human beings the ability to create music using this scientific foundation is subjective. Music holds a great variety of expression, and the techniques of composition vary greatly. We all have our own opinions of who our favourite 'genius' composers are, many will feel that Hindemith's impressive memory makes him a genius and some will not. What makes a child naturally musically gifted is an accumulation of many factors; the inheritance of musical genes from a parent is just a likely to create genius as the upbringing of a child is. The placement of a particular composer or piece in its history also shows the importance of culture in the measure of genius. Faith as a suggestion, whilst being more difficult to comprehend for many people must also be treated with respect. The fact is that no one can reach a definite answer, because there isn't one. The very nature of musical genius, much like the nature of faith and the nature of beauty, is something that cannot be described through human reason. Human intelligence will have to cope with an understanding of the origins of genius musical creativity, but its essence will have to remain a mystery. ...read more.