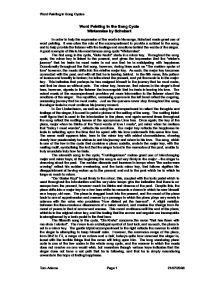 Word Painting in the Song Cycle Winterreise by Schubert

Word Painting in the Song Cycle Winterreise by Schubert In order to help the expression of the words in his songs, Schubert made great use of word painting. It was often the role of the accompaniment to provide a subtext to the song, and to help provide the listener with the feelings and emotions behind the words of the singer. A good example of this is his most famous song cycle "Winterreise". The first song in the cycle, "Gute Nacht" starts in a minor key. Throughout the song cycle, the minor key is linked to the present, and gives the impression that the "winter's journey" that he feels he must make is not one that he is anticipating with happiness. Occasionally throughout the first song, however, during lines such as "The maiden spoke of love" however, the music drifts into the relative major key. As such, the major key becomes connected with the past, and with all that he is leaving behind. In the fifth verse, this pattern of tenses and tonality is broken; he talks about the present, and yet the music is in the major key. ...read more.

The eleventh song in the cycle, "Fruhlingstraum" makes great use of interchanging major and minor keys; at the beginning the song is set very firmly in the major - the singer is dreaming about the past. The sudden discords and increase in tempo when "the cocks were crowing" reflect his sudden awakening, and the tonic minor key, that follows signifies his disappointment at having woken up to the present, and not to the past which he to which he longs so much to return. "Der Greise Kopf" is set firmly in the minor; this, coupled with the tonic pedal which is used throughout the introduction and the very slow tempo give the indication that there is no escape from the present, however much he thinks and dreams of the past. Despite this, the piece drifts into a major key for a few bars while he recounts a dream in which he saw himself as a happy, old man. The piece is dragged back into the present, and the mood of the piece back to one of apprehension and unease by a passage in which the piano plays very nearly in octaves with the voice who proclaims "How distant yet the heaven!". ...read more.

This symbolises the drone of the Organ played by "Der Leiermann", but also implies that the misery and despair that the singer is feeling are inescapable. This is reinforced by the fact that the whole piece, save for two acciacaturas in the introduction, is completely diatonic. There is no hint of any major key, tonic or relative, and this gives the listener the impression that the singer is no longer reflecting upon the happiness of the past. The piano melodies intersecting the singer's lines reflect an unspoken dialogue between the organ grinder and the singer, indicating that perhaps, the singer has found a place to rest at last, with this organ grinder whose "gifts are rare", and who is equally as wretched as himself. The last note that the singer sings is the dominant of the key, and this leaves his tale open ended. It is impossible to know whether he has found companionship with the organ grinder, or whether he is destined to wander forever, with no destination, and always in despair. . ?? ?? ?? ?? Word Painting in Song Cycles Tom Adams Page 1 21/07/2008 ...read more.