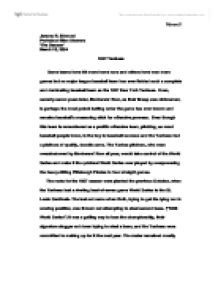 Jeremy R. Edmund Professor Ellen Stowers 'The Season' March 10, 2004 1927 Yankees Some teams have hit more home runs and others have won more games but no major league baseball team has ever fielded such a complete and dominating baseball team as the 1927 New York Yankees. Even, seventy-seven years later, Murderers' Row, as their lineup was nicknamed, is perhaps the most potent batting order the game has ever known and remains baseball's measuring stick for offensive prowess. Even though this team is remembered as a prolific offensive team, pitching, as most baseball people know, is the key to baseball success and the Yankees had a plethora of quality, durable arms. The Yankee pitchers, who were overshadowed by Murderers' Row all year, would take control of the World Series and make it the quickest World Series ever played by overpowering the heavy-hitting Pittsburgh Pirates in four straight games. The roots for the 1927 season were planted the previous October, when the Yankees lost a riveting best-of-seven game World Series to the St. Louis Cardinals. The last out came when Ruth, trying to get the tying run in scoring position, was thrown out attempting to steal second base. ("1926 World Series") It was a galling way to lose the championship, their signature slugger cut down trying to steal a base, and the Yankees were committed to making up for it the next year. ...read more.

(Forman. "1927 AL Baseball Statistics") He also confounded his teammates by being a Kentuckian and refusing to drink at a time when, Prohibition notwithstanding, alcohol flowed freely among major leaguers. "I have never gone in much for liquor," Combs explained. A teammate once challenged him, telling the center fielder that he had better learn to drink if he expected to stick with the Yankees. ("Murderers' Row") Combs never caved in to their ridicule and went on to have a Hall of Fame career as a Yankee. Bob Meusel had a .337 average with 47 doubles and 103 RBIs batting behind Gehrig, while his 24 stolen bases were second best in the league and in one game he stole second, third and home. Tony Lazzeri, in just his second season, batted .309 with 18 home runs, third in the AL behind Ruth and Gehrig, and 102 RBIs. Even Mark Koenig had 34 extra base hits and batted .285 and was on third base when Ruth capped the season with his 60th home run. Joe Dugan (.269) and Pat Collins (.275) were offensive afterthoughts since by the time they got to the plate, the damage had usually been done and the Yankees usually in the lead. The team led the league with a .307 batting average and a .489 slugging percentage. (Forman, "1927 AL Baseball Statistics") For all their fireworks, the Yankees would not have enjoyed the same success were it not for their deep stock of pitching talent. ...read more.

The Pirates made another pair of devastating errors in the second game as George Pipgras hurled his beloved Yankees to a 6-2 win. In Game Three, Herb Pennock took a perfect game, not one Pirate reaching base, into the eighth inning as the Yankees won easily, 8-1. Wilcy Moore showed his versatility by starting game four and went the distance, all 9 innings, only giving up just one earned run. Although the Pirates tied the game 3-3 with two scores in the seventh, Moore's teammates came back with two outs in the ninth to score the series-winning run on a Johnny Miljus wild pitch and the Yankees were once again the champions of Major League Baseball. (Aubrecht, "1927 World Series") The 'Five o'clock Lightning' boys ended the season the same way the 1927 Yankees received their name...a fatal lead-changing blow at the end of the game by its offense. They finished the season with a combined regular-season and post-season winning percentage of .722, the best ever. (Forman, "1927 AL Baseball Statistics") The 1927 season was the apex of a three-year domination, 1926-1928, by the Yankees and their multi-faceted juggernaut of a team. The Ruth/Gehrig combination is still the most prolific teammates ever to play together in major league baseball. George 'Babe' Ruth, Lou Gehrig, Waite Hoyt, Tony Lazzeri, Earl Combs, and Herb Pennock all are now enshrined in 'the Mecca of the baseball world', the Baseball Hall Of Fame in Cooperstown, NY. ...read more.