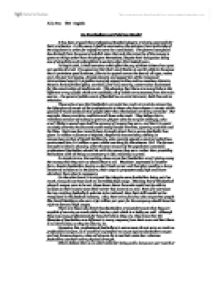 Do Footballers get Paid too Much?

Do Footballers get Paid too Much? It has been argued that professional football players are being overpaid for their profession. In this essay I shall be expressing the opinions from both sides of the argument in order for myself to come to a conclusion. The general complaint has derived from the general public's view that only the minority of the money is spent on things other than the players themselves, despite their occupation being one of simplicity and unbeneficial to society when first looked upon. To begin with, I shall overview what effect the pay of these citizens has upon our society if at all. It is apparent that their contribution is worth while in the sense that it promotes good business, (due to its appeal across the board; all ages, males and -the ever increasing- female viewers and supporters of the renowned international sport) it provides many job opportunities such as coaches, cleaners, those in the box/ticket office, wardens, first-aid, security, construction businesses for the construction of stadiums etc. This showing that there are many links to the different array of jobs which are available, all of which are outcomes from the main source - the general publics want of football as an entertainment; both live and on television. ...read more.

Even if it were just the top-ranking footballer's salaries to be reduced, then their skill would not be recognised in the football industry. Also, there are a fair few who argue that people like David Beckham who earn �30 million per year for his company should have the right to demand high wages. There are those who think that footballers are just fortunate that they are capable of earning so much whilst having a job which is a hobby as well. Although they may envy professionals for how fortuitous they are, they know that the lifestyles of footballers are different in many respects from their own and that there is no alternative, so they let what is, be. Opposing this, professional footballers in some cases do not earn as much as professional singers, so it would be unjustified to argue against footballers wages and not famous singers, when all singers do is use their voice box whereas footballers use their entire physical strength. Others believe that as an alternative for being paid a lump sum per month or year, players should be paid for their performance i.e. ...read more.

Nevertheless, competition between the players themselves means that no single player is willing to reduce his salary is others aren't willing to do the same. It can be asserted that players are blinded by the money and so are not, cannot focus on the game at hand, totalling in the quality of games decreasing, leaving the future of football on a knife edge. In conclusion, it is obvious that professional footballers are being paid a ridiculous amount - and they know it, but with nobody stopping the increasing wages, there is nothing we -as viewers of the traditional sport we all love- can do. Personally, their salaries do not concern me since I am not experiencing any effects of them, other than what the newspapers and news are constantly hurling upon me of the general publics viewpoint. I do however; believe that it is unfortunate that skilled beings such as doctors and teachers are not getting such a large pay-check. Then again, footballers are skilled in their own right and are, in my opinion, lucky to achieve what they do. In my opinion, their salaries shall continue to increase due to there being a world trade of the players. Ailie Fan 10B English ...read more.