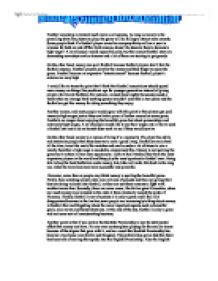 Money is ruining fun in football

Football nowadays is treated much more as a business. As long as money is the prevailing drive for players to play, the game will be failing to attract more crowds. Some people think if a football player earns his company thirty million a year in revenue for both on and off the field reasons, doesn't he deserve then to demand a high wage?. A lot of people would argue this point, but the amount football stars are demanding nowadays can be obscene and a lot of them are starting to get greedy On the other hand, money can spoil football because football players don't feel the football essence. Football players play for the money and they forget to enjoy the game. Football became an expensive "entertainment" because football player's salaries are very high. I would like to stress the point that I think that football associations should spend more money on things like youth set-ups for younger generation instead of giving players like David Beckham for instance, around about eighty thousand ...read more.

Money is not spoiling the game but it makes it even more spectacular. Look at Real Madrid, they have the most expensive players in the world and they play the most spectacular football ever. Being able to buy the best footballers costs money, but clubs will make this back in the long run, when the team becomes more successful and powerful. However, some fans or people may think money is spoiling the beautiful game. Firstly, fans watching players who earn millions of pounds and then not giving their best can bring violence into football, as fans can use these reasons to fight with another teams fans. Secondly, there are some cases, like Italian giant Firoentina, when too much money was invested in the club; it then eventually ruined the pride of Florence. Thirdly, football is not a business it is only a game and I feel a bit disappointed because in the last ten years people are increasingly talking about money in football that and forgetting about the more important aspects such as beautiful goals, nice moves and funny situations. ...read more.

Furthermore, to keep an organisation running, you need money. In competition where no rules are set for a ceiling on wages etc, no one will really stop at trying to get the best players. To get the best players, they have to spend a lot of money. Transfer fees for clubs are insanely high, and players seeing that, feel that the club should be entailed to a proportion of that transfer for his salary, as they must see him that valuable. With more TV deals, and higher marketing, there are more clubs spending more and more, players receiving more and more and the gap between the rich and poor clubs keep increasing. The players are not at fault for receiving that much, the clubs should be more responsible for helping it reach that high. The more revenue they want, the more willing they would be on spending. I conclude that football players do need a bit of money to maintain the high standard of entertainment, however when too much is given some people abuse that and bring the game into disrepute. ...read more.