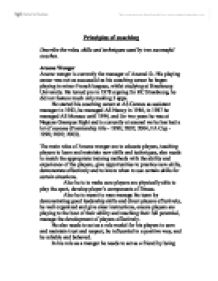 principles of coaching.Describe the roles, skills and techniques used by two successful coaches

Principles of coaching Describe the roles, skills and techniques used by two successful coaches. Arsene Wenger Arsene wenger is currently the manager of Arsenal fc. His playing career was not as successful as his coaching career he began playing in minor French leagues, whilst studying at Strasbourg University. He turned pro in 1978 signing for RC Strasbourg, he did not feature much only making 3 apps. He started his coaching career at AS Cannes as assistant manager in 1983, he managed AS Nancy in 1984, in 1987 he managed AS Monaco until 1994, and for two years he was at Nagoya Grampus Eight and is currently at arsenal we he has had a lot of success (Premiership title - 1998; 2002; 2004, FA Cup - 1998; 2002; 2003). The main roles of Arsene wenger are to educate players, teaching players to learn and maintain new skills and techniques, also needs to match the appropriate training methods with the ability and experience of the players, give opportunities to practice new skills, demonstrate effectively and to know when to use certain skills for certain situations. Also he is to make sure players are physically able to play the sport, develop player's components of fitness. Also he is meant to man manage his team by demonstrating good leadership skills and direct players effectively, be well organized and give clear instructions, ensure players are playing to the best of their ability and reaching their full potential, manage the development of players effectively. He also needs to act as a role model for his players to earn and maintain trust and respect, be influential in a positive way, and be reliable and behaved. ...read more.

He is very knowledgeable in his sport. Alex Ferguson is a disciplinarian and has showed this on a few occasions. Alex Ferguson tells the players what he wants out of them during a training session and stop and starts when need be. Alex Ferguson is a good communicator as he communicates very well with his players and he is also very well organized. He also knows how to bring out the best in young stars for example players like Ryan Giggs, David Beckham, Paul Scholes, and Wayne Rooney. Both Alex Ferguson and Arsene Wenger's roles as a coach and manager are similar with regards to educating a player and training players, this is due to the fact that they have similar responsibilities when it comes to training their players and making them physically able to play in their respective sport. With regards to educating players, they both have had young players with star potential and have been able to nurture and mentor them in a similar way to ensure they reach their potential. They are both also good role models for their players despite the fact that they were both not extremely successful as a player. Both coaches are well organized and both analyse, time manage, evaluate performances and solve tactical problems very well. They also both have good knowledge of the sport. Sir Alex Ferguson has more experience and is a major disciplinarian unlike Arsene Wenger an example of this is Alex Ferguson will sell players despite their ability if they think they are bigger than the club e.g. ...read more.

These coaching styles may not work with the other two as they me feel bigger than the club. Evaluation Name: Jerome Okimo Date: 30/10/06 Weather: good Numbers: 11 Time: 45 mins Equipment: balls, cones, half pitch Room/area: Astroturf Standard: BTEC Age range: 18-19 Strengths of session: The session was set up well, ran smoothly and was no waiting around. The progression of the session was good and specific which ended up in a game situation. I had everyone's attention because it was good and enjoyable therefore it was easy to coach. The session was disciplined and organized. Weakness of session: I wasn't loud or vocal enough so therefore some people may not have heard or understood. I didn't show the students what do to be successful only told them but didn't demonstrate. Session could have been of a higher tempo so it could be more game related and like a game situation. Recommendations and changes: I should be more vocal and louder next time therefore giving clear instructions on what needs to be done. I should do more demonstrations for the students as it can help because some people understand it better when they see it rather than told. Strengths of participants All the participants were on time organized and had appropriate kit. The participants were behaved during the session. They had the ability to carry out the session. They had the potential to improve from the session. Weaknesses of participants The participants were not always completely focused on the session. Some participants did not understand the ideas put across to them. Recommendations Make sure students are not standing about so they get bored. Ensure that the points are put across clear and effectively. ...read more.