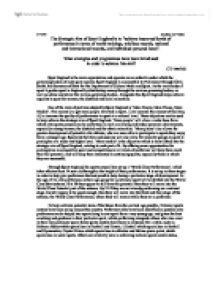 The Strategic Aim of Sport England is to &quot;achieve improved levels of performance in terms of world rankings, win/loss records, national and international records, and individual personal bests&quot;.

27/1/03 Jonathan de Vletter The Strategic Aim of Sport England is to "achieve improved levels of performance in terms of world rankings, win/loss records, national and international records, and individual personal bests". What strategies and programmes have been introduced in order to achieve this aim? (15 marks) Sport England is the main organisation and operates as an umbrella under which the governing bodies of each sport operate. Sport England is accountable to Parliament through Chris Smith, the Secretary of State for the Department of Culture Media and Sport. As the main body of sport it guides sport in England by distributing money through the various governing bodies, as well as advise and direct the various governing bodies. Alongside this Sport England helps achieve equality in sport for women, the disabled and racial minorities. One of the main objectives adopted by Sport England is 'More People, More Places, More Medals'. This means i) ...read more.

Through Sport England, the sports council has set up a 'World Class Performance', which takes athletes from 14 year old through to the height of their performance. It is set up in three stages in order to help give performers the best possible help during a particular stage of development. At the age of 14, elite performers in their age group for a particular sport will be drafted into the World Class Start scheme. If at 18 they appear to still have the potential then they will move into the World Class Potential part of the scheme. By 22 if they are not already performing on a national stage, but still appear to be good enough, then they will move into the third and final stage of the scheme, the World Class Performance, where they will remain while they are a performer. To help cultivate potential stars of the future from the earliest age possible, National sports centres have been set up around the country. ...read more.

Overall, performance in elite competition by English and British athletes and teams has improved as a result of such actions within sport. One of the keys to successful sports performance is funding. Funding allows such schemes to be developed, enabling the nurturing of talent from very young age. It also allows for the setup of facilities, and especially the three point objective of Sport England. However, things are still not perfect. It is noticeable that many foreigners hold important positions within the management of many of our sports teams, most notably Sven Goran-Eriksson in charge of the national football team. As such it could be advised that as well as focusing on our elite performance, those who run and manage our teams and individuals should also be improved, with more domestic talent gaining the top awards for coaching etc. There is also still room for improvement to learn from schemes and policies run in foreign countries such as Australia and France where sport is currently a success, and could adopt some of the ideas they have put into place. ...read more.