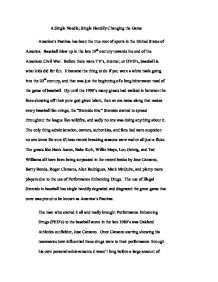 The use of illegal Steroids in baseball has single handily degraded and disgraced the great game that once was proud to be known as Americas Pastime.

A Single Needle; Single Handily Changing the Game America's Pastime has been the true root of sports in the United States of America. Baseball blew up in the late 19th century towards the end of the American Civil War. Before there were TV's, internet, or DVD's, baseball is what kids did for fun. It became the thing to do if you were a white male going into the 20th century, and that was just the beginning of a long bittersweet road of the game of baseball. Up until the 1990's many greats had walked in between the lines showing off their pure god given talent, then an era came along that makes every baseball fan cringe, the "Steroids Era." Steroids started to spread throughout the league like wildfire, and sadly no one was doing anything about it. The only thing administration, owners, authorities, and fans had were suspicion no one knew for sure if these record breaking seasons were real or all just a fluke. The greats like Hank Aaron, Babe Ruth, Willie Mays, Lou Gehrig, and Ted Williams all have been being surpassed in the record books by Jose Canseco, Barry Bonds, Roger Clemens, Alex Rodriguez, Mark McGuire, and plenty more players due to the use of Performance Enhancing Drugs. The use of illegal Steroids in baseball has single handily degraded and disgraced the great game that once was proud to be known as America's Pastime. The man who started it all and really brought Performance Enhancing Drugs (PED's) to the baseball scene in the late 1980's was Oakland Athletics outfielder, Jose Canseco. Once Canseco starting showing his teammates how influential these drugs were to their performance through his own personal achievements it wasn't long before a large amount of players were using PEDs. Canseco states in his book, Juiced: Wild Times, Rampant 'Roids, Smash Hits, and How Baseball Got Big that, "About 85% of Major Leaguers have used it" (Canseco). ...read more.

1991 to 2002 was known as the "Steroid Era" in professional baseball. Over those years particularly in 1995 after the cancellation of the 1994 playoffs and World Series the statistics of a majority of the players skyrocketed, which in retrospect played a huge role in filling the empty seats back up after the 1994 strike. I'll be explaining that up until to this point in time the MLB did not have strict regulations on testing for the use of Performance Enhancing Drugs (PEDs) Kuenster, John. "Major League Player Records Dishonored by Steroid Users." Baseball Digest. 62.2 (March 2008): SPORTDiscus. Web. 8 November 2011. John Kuenster touches on a very valuable subject when it comes to records, and honors given in the MLB. Back in early in mid 1900's the greats of the game like, Babe Ruth, Ted Williams, Hank Aaron, Joe DiMaggio, Bob Feller, and Ernie Banks. They all set legitimate records that should never be shadowed by the players who eventually broke them. These few players all had something in common. That was hard work and love for the game. They didn't use PEDs to up there stats or to get to a higher number in a certain category. These historic greats earned their records off pure talent that was god given and worked hard to mature. The greats of our time such as, Barry Bonds, Roger Clemens, Alex Rodriguez, or Mark McGwire also hold records like men mentioned earlier. The only difference between the past greats and the current greats is that these new all-stars were accused of using Steroids to achieve their records. Not only are the players the ones to blame for the whole "Steroid Era." Stricter steps should have been taken from the get go through the league to enforce steroid testing to ensure the safety and fair play in professional play of baseball before the use of steroids spread like wildfire through the MLB. ...read more.

It became an almost regular regime for a majority of the MLB. Tests were eventually being given, but that didn't stop the players. When there's motive to do illegal substances there's always the backup plan to keep these athletes out of trouble. There were plenty of ways to come up clean on a test, and when the testers would find a way to stop it, Victor Cante and his crew at BALCO labs would just simply find another way to cheat. Even when the few unlucky players' get caught all they have to do is admit it and simply explain they were told it was something else. For Example, Barry Bonds, when he spoke in front of the BALCO grand jury he came clean about all the PEDs he had taken, but the catch was he stated that he was oblivious to what he was actually using. People of this stature will make their illegal decisions, but don't think they don't have all the answers for when the going gets tough. I'll be using Quinn's article "BASEBALL STEROIDS ERA" to inform how little baseball can really do to not only catch these users, but to actually put a stop to the Performance Enhancing Drugs. If not cheating tests to save their own a*s' these professional athletes will just find a perfect window of time to where they know they won't be tested in the offseason to fit in a couple cycles here and there to maintain the gains through using PEDs. Testing companies such as the World Anti-Doping Agency (WADA) and the U.S Anti Doping-Agency (USADA) will never stop trying to improve the efficiency of the tests to make cheating near impossible if not totally full proof, but as those agencies are working to stop the cheaters don't think the cheaters at BALCO labs aren't finding ways to break through and find loop holes in their tests. Verhaeghe, Dan. "Bud Selig Lays Down the Hammer on Performance Enhancing Drugs". Bleacher Report. (January 2008): Web. 30 November 2011 ...read more.