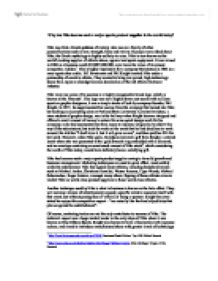 Why nike has become such a leading sports transnational corporation.

Why has Nike become such a major sports product supplier in the world today?

Nike was first a Greek goddess of victory, who was in a family of other personifications such as war, strength, force and rivalry. If people were asked about Nike, the Greek mythology is highly unlikely to arise. Nike is now known as the world's leading supplier of athletic shoes, apparel and sports equipment. It was valued in 2006 as a business worth $10,897,000,000, over twice the value of its closest competitor, Adidas[1]. This is highly impressive for a company that started in 1964 as a mere sports shoe outlet. Bill Bowerman and Phil Knight created Nike under a partnership of coach to athlete. They wanted to bring low priced, high technology shoes from Japan to dislodge German domination of the US athletic footwear industry.

Nike may owe some of its success to a highly recognisable brand logo, which is known as the ‘Swoosh’. This logo was not a highly drawn out search with millions spent on graphic designers, it was a simple stroke of luck by company founder, Phil Knight. In 1971, he supplemented his income from the company that turned into Nike by teaching an accounting class at Portland State University. Carolyn Davidson, a mere student of graphic design, was in the hallway when Knight became intrigued and offered a small amount of money in return for some quick design work for his company, as he had representatives from Japan to impress. Originally, he didn’t like any of the submissions, but took the work on the event that he had deadlines to work around. He told her "I don't love it, but it will grow on me”, and then paid her $35 for her work. However, when Nike grew, Davidson received a gift from Knight, a catered lunch where she was presented with a gold Swoosh ring embedded with a diamond, and an envelope containing an unreleased amount of Nike stock[2], which considering the worth of Nike today, would have definitely been a satisfying gift.

Nike has become such a major sports product supplier owing to its solid growth and business management. Marketing techniques are used to great effect, most notably celebrity endorsement. Nike has signed many athletes, including household names such as Michael Jordan, Christiano Ronaldo, Wayne Rooney, Tiger Woods, Michael Schumacher, Roger Federer, amongst many others. Signing of these athletes aims to market Nike as world class product suppliers to these world class athletes.

Another technique used by Nike is what in business is known as the halo effect. They will increase volume of advertisement around a specific event to associate itself with that event, but without paying fees of ‘officially’ being a sponsor. Knight has even stated he enjoys this competitive aspect – “we actually like the kind of publicity that pits us against the establishment”.

Of course, marketing tactics are not the only contributor to success of Nike. The technical aspect was a huge market leader in the early days of Nike when it was known as Blue Ribbon Sports. Knight was known to have a fascination with Japanese culture, and aimed to introduce manufactured shoes with greater levels of technology and design involved, but with cost effective labouring prices aimed to undercut the current German domination of the sports product industry. The techniques worked, and he boasted that his shoes were on average 2oz lighter than the market leader at the time, Adidas.

Advantages of Nike’s success can be seen everywhere, they are so confident of their brand they can simple display a poster or advert of the Swoosh and everyone will associate with Nike. The endorsements bring in millions, and as the players get more successful, Nikes success continues to grow, enabling them to sign more athletes, and even help them develop. This sheer marketing genius is at a great benefit to Nike, as they can continue to reap the rewards of athletes indefinitely.

However, it is not all success for Nike. There have been many controversies on human rights issues, such as excessive labour and even child labour. In the 90's, Nike faced criticism for use of child labour in Cambodia and Pakistan in factories it contracted to manufacture soccer balls. Although Nike took action to curb or at least reduce the practice of child labour, they continue to contract their production to companies that operate in areas where inadequate regulation and monitoring make it hard to ensure that child labour is not being used.[3]

Nike’s success has come from numerous activities, but they will always be known as a company associated with sporting icons. List any of your personal favourite professional players and they will most likely have a relationship with Nike or have had offers from them in a professional context. However, as a business, questions have been raised whether they have an ethical responsibility. Regardless, they are definitely a huge success and a great market leader.