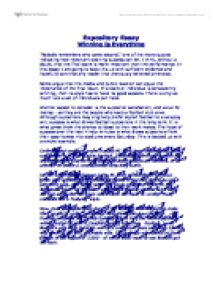 Expository Essay Winning Is Everything "Nobody remembers who came second," one of the many quotes indicating how important sporting success can be. I think, without a doubt, that the final score is more important than the performance. In this essay I am going to back this up with sufficient evidence and hopefully convince any reader that previously believed otherwise. Some argue that the media and public reaction can equal the importance of the final result. If a team or individual is consistently winning, then its style has to have its good aspects. There is only so much luck a set of individuals can have. Another aspect to consider is the supporter satisfaction, and value for money - as they are the people who keep a football club alive. Although supporters may originally prefer stylish football to a scrappy win, success is what drives football supporters in the long term. It is what gives them the chance to boast to their work mates. The hope of success over the next ninety minutes is what draws supporters from their cosy homes into stadiums every Saturday. ...read more.

Things are looking much more bright, fifty of so miles west, at Celtic Park. Even though their football might not be of the highest order, Martin O'Neil's side have won the Scottish Premier League title twice and have made a habit of winning using their bullying style. Celtic's average attendance is about 58,000 - the supporters all idolise the players and the club recently enjoyed a quest in the European Champions League. This surely proves whatever the neutral may think, a clubs loyal supporters want to win and care very little about how it comes about! How acceptable, a bad performance can be is often influenced by the importance of the game in question. If it means avoiding relegation or winning the league, any supporter will gladly settle for a one nil victory, courtesy of a last minute controversial goal. However in a friendly, or a match which has no bearing on a teams position - a glamorous 4-4 draw will hardly been seen as the end of the world. The famous saying reads, "It's not winning that matters, it's taking part." ...read more.

In a recent survey set to a number of up and coming international athletes, nearly 70% said that if they were offered the chance to win an Olympic gold medal and die the next day, they would grab it with both hands. This shows the commitment and passion that sportsmen contain, it also shows that success means much more to them than anything else. If a player is not winning then confidence is drained out of them. There is a lot of money circulating around modern sport, football is no exception. However, anyone who thinks modern sport is completely about money couldn't be more wrong. The most prestigious and highly regarded sporting event worldwide is the Olympics. An event powered by the will to win, where the competitors play for pride and self satisfaction and no money is involved. There are also millions of amateur sportsmen across the globe. Team spirit, being a good sport, loyalty, media reaction and supporter satisfaction are all important factors in modern day sport. However winning keeps the players and fans happy, not to mention bringing in the money that clubs need to survive on. Obviously not everyone is able to win, but that is no excuse for playing to come second. ...read more.