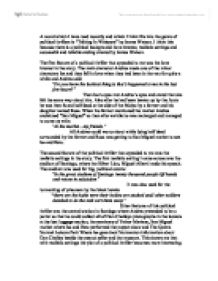 A novel which I have read recently and which I think fits into the genre of political thrillers is &quot;Talking In Whispers&quot; by James Watson.

A novel which I have read recently and which I think fits into the genre of political thrillers is "Talking In Whispers" by James Watson. I think this because there is a political background: love interest, realistic settings and successful and reliable ending created by James Watson. The first feature of a political thriller that appealed to me was the love interest in the story. The main character Andres meets one of the minor characters Isa and they fall in love when they had been in the van for quite a while and Andres said: "Do you know the luckiest thing is that's happened to me in the last few hours?" Then Isa's eyes met Andres's eyes and stated that she felt the same way about him. ...read more.

The second feature of the political thriller that appealed to me was the realistic settings in the story. The first realistic setting I came across was the stadium of Santiago, where the Silver Lion, Miguel Alberti made his speech. The stadium was used for big, political events: "In the great stadium of Santiago twenty thousand people lift hands and voices in salutation" It was also used for the tormenting of prisoners by the black berets: "there are the baths were their bodies are stacked until other soldiers detailed to do the task cart them away" Other features of this political thriller are; the central station in Santiago where Andres pretended to be a porter so that he could collect all of Don Chaileys photographs in the lockers at the lost luggage section, the ...read more.

This shows me Andres had feelings for Isa because he wouldn't have tried to get to them with the amount of pain he was in if he didn't love her. Other features of a political thriller that appeals to me are: fast-paced action, heroes being hunted by those in power, also when the reader feels the hero has the right against more powerful enemies, and there were a lot of escapes and dangers. This novel has good features in it, the three main features that appealed to me are: the love interest, the realistic settings and the believable successful ending. "Talking In Whispers" is a novel, which I think fits the genre of political thriller. ...read more.