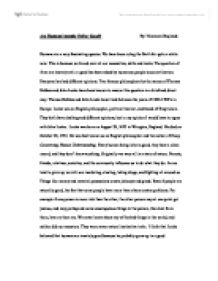 Are Humans Innately Evil or Good?

Are Humans Innately Evil or Good? By: Nazaneen Baqizada Humans are a very fascinating species. We have been ruling the Earth for quite a while now. This is because we brood over all our necessities, skills and looks. The question of if we are innately evil or good has been asked by numerous people since civilization. Everyone has had different opinions. Two famous philosophers by the names of Thomas Hobbes and John Locke have been known to answer this question in a brief and direct way. Thomas Hobbes and John Locke have lived between the years of 1500-1700's in Europe. Locke was an English philosopher, political theorist, and found of Empiricism. They both have clashing and different opinions, but in my opinion I would have to agree with John Locke. ...read more.

Things like money and material possessions create jealousy and greed. Even if people are naturally good, the fact that some people have more than others creates problems. For example if one person is more rich than the other, the other person may at one point get jealous, and may perhaps do some unscrupulous things to the person, like steal from them, hate on them etc. We never knew about any of the bad things in the world, and neither did our ancestors. They were never natural instinctive traits. I think that Locke believed that humans are innately good because he probably grew up in a good neighborhood and had a good experience growing up. If one grows up in a very beautiful, safe, and well-mannered community and family, obviously they will do what their surrounding do, which is to do good. ...read more.

Why would we bother setting up cities, going about helping others, reviewing where planet earth sits in its ability to survive if he didn't want these things to do well? Sure there are people round that make it bad for all the others of us trying to do good, but weigh it up and you'll see that only a small percentage of people are out to pull the curtain down on everyone else. If us humans were born evil, then why when we do the bad things that we do in life still feel the guilt and regret for it afterwards? Obviously the answer to this is because we aren't evil; we just get influenced to become evil. In conclusion every single human was born good and even if they do get influenced to become evil they will still have all the regret, conscience, guilt, repentance, and shame on their shoulders to carry. ...read more.