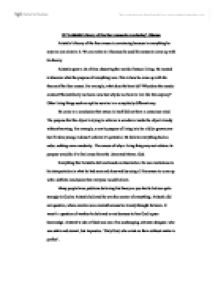 'Aristotle's theory of the four causes is convincing' Discuss.

Many people have problems believing his theory as you had to believe quite strongly in God as Aristotle believed he was the creator of everything. Aristotle did not question, where creation was created because he already thought he knew. It wasn't a question of weather he believed or not because to him God is pure knowledge. Aristotle's idea of God was one of an unchanging, ultimate designer, who was static and eternal, but impassive. 'Only God, who exists as form without matter is perfect'. However, Aristotle's theory is seen to be a lot more to do with common sense compared to Plato's, which is a lot more to do with interpretation. ...read more.

Another disagreement that Aristotle made was that he could never just 'draw the line' somewhere with what was the ideal. There was always something better than what was thought to be the best. For example; beauty and truth were ideal according to Plato but, how ideal can you get? The reason why Aristotle and Plato had so many disagreements was because they were really talking about completely separate ideas. Plato's theory was based upon situations such as; how justice is known throughout the world? No-one decided upon particular rules to follow. Whereas Aristotle was trying to understand what reality really is. Aristotle's theory was much more convincing as many people can understand more clearly where he got his ideas from but Plato's ideas are quite different to what people would expect to hear. ...read more.