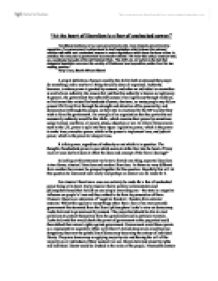 &quot;At the heart of liberalism is a fear of unchecked power.&quot;

"At the heart of liberalism is a fear of unchecked power." "An illiberal tendency of our new government is the move towards government by regulation. Our government is determined to draft legislation which imbues the relevant minister with wide and unchecked powers to make regulations which have the force of law. In practice, this amounts to government by executive decree. We know this odious creature well, as a particular favourite of the old National Party. The ANC are not na�ve to the fact that delegated legislation removes the scrutiny of Parliament and opposition parties from the law-making process." Tony Leon, South African liberal A simple definition of power could be the ability both to demand that people do something, and to say how a thing should be done or organised. Authority, however, is where power is granted by consent; and when an individual or committee is said to have authority, the reason that justifies this authority is known as legitimacy. In general, the government has authority because it has legitimacy through: tradition, as Parliament has existed for hundreds of years; charisma, as many people may follow present PM Tony Blair through the strength and attraction of his personality; and democratically through the people, as they vote in elections for the MP or party they wish to form the government. ...read more.

They saw democracy as applying majority rule and forcing the will of the majority on all individuals if they wanted it or not, liberals believed minority rights and individual liberty would be crushed in the name of the people. Nineteenth century liberals saw democracy as the Ancient Greek philosophers Plato and Aristotle did, a system of rule by the masses at the expense of wisdom and property. All of this gives this appearance of a fear of unchecked power being at the heart of classical liberalism, a fear that democracy if given too much free reign could crush the rights of individuals. Other classical liberal arguments including those for social Darwinism and beliefs on social equality support this. Classical liberals believe so firmly in laissez-faire economics and that humans were self-reliant that the state should not attempt to look after the few who were too weak to look after themselves. They believed giving even this much power to the state would be detrimental to their lives, as it would take their money in tax to look after these people who they believed deserved what they had in life as they had earned it. It is easy to conclude that at the heart of classical liberalism certainly lays a fear of unchecked power and that classical liberalism as an ideology is about combating that power and making certain it can not have any influence of individual rights and freedoms. ...read more.

At the heart of modern liberalism would seem to be a belief that the state should help individuals help themselves to become the best they can and give equal opportunity to all rather than help no one for fear of the state becoming all powerful. So is the statement of unchecked individualism being the fear at the very heart of liberal ideals? The classical liberals seem to have a much harsher stance on this, due to the specifics of their ideologies, and the fact that their strict belief in individual success. The Modern liberals have a much more relaxed view on this, as they appreciate that sometimes it is essential to some individuals rising to the level of their full potential. To say that the statement it then only true of one of the two factions of liberalism though would be wrong, as it is still an important factor in the way Modern liberals think. Overall I think it is possible to class both as having differing fears for, and in turn it is possible to conclude that in that case, liberalism does have a degree of fear for unchecked power at its heart, just to varying degrees depending on the different beliefs of liberals. Modern liberals do fear unchecked power but not to the overriding extent that classical liberals do. ...read more.