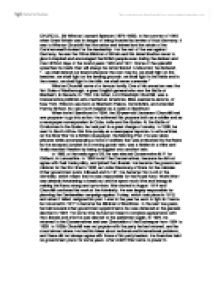 CHURCILL, Sir Winston Leonard Spencer (1874-1965). In the summer of 1940 when Great Britain was in danger of being invaded by armies of n**i Germany, it was to Winston Churchill that the nation and indeed and the whole of the Commonwealth looked for the leadership. For the rest of the war against Germany, he was the Prime Minister of Britain and his determination never to give in inspired and encouraged the British people even during the darkest and most difficult days of the fateful years 1940 and 1941. Some of the splendid speeches he made then will always be remembered. Undaunted, he declared, "...we shall defend our island whatever the cost may be, we shall fight on the beaches, we shall fight on the landing grounds, we shall fight in the fields and in the streets, we shall fight in the hills; we shall never surrender." Winston Churchill came of a famous family. One of his ancestors was the first Duke of Marlborough, a great English general who won the Battle of Blenheim, in Bavaria, in 1704. His father, Lord Randolph Churchill, was a Conservative politician who married an American, Miss Jeannette Jerome, of New York. Winston was born at Blenheim Palace, Oxfordshire, and attended Harrow School, but was much happier as a cadet at Sandhurst. ...read more.

In 1930s Churchill was not popular with the party he had retuned, and he stood almost alone. He had his ideas about national and international problems, and these did not always agree with those of his party leaders. He therefore held no government posts for some years. After Adolf Hitler came to power in Germany in 1933 Churchill saw that a war would come and tried to persuade the government and people of Great Britain to prepare for it. When World War II broke out in September 1939 he took office once more as First Lord of the Admiralty. His greatest period and his greatest efforts were still to come, however. In May 1940 the government of which Neville Chamberlain was Prime Minister fell, and amidst the danger and confusion on that time Churchill became Prime Minister. It was characteristic of him that he told parliament: "I have nothing to offer but blood, toils, tears and sweat", but that his aim was, "...victory however long and hard the road may be." All the main political parties united in his government to form what is called a coalition. Always anxious to see things for himself, Churchill went among the armed forces, to visit factories or to areas badly bombed. ...read more.

In 1956 King George VI conferred upon him the Order of Merit and cities and universities at home and abroad, as well as foreign governments, gave him their highest honours. Now no longer Prime Minister, he began to write his history of the war and traveled and made speeches in many countries. He enjoyed his old hobby of painting- which often took him to the south of France- and his farm at Chartwell, in Kent, where he had a dairy herd of fine pigs. In 1951 the Conservatives won the general election and Churchill was again Prime Minister until he resigned on grounds of age in 1955. He was made a Knight of the Order of the Garter in 1953. Sir Winston retired from parliament in 1964 and died in London on January 24, 1965. He was given a state funeral at which the Queen was chief mourner, and was buried at Bladon, Oxforshire. Winston Churchill was one of the great men of all ages. He will be remembered for his sturdy character and individualism, for his writings- the histories of both world wars and several other books including biographies of his father and of the first Duke of Marlborough- for his speeches, as well as for his outstanding service to his country and to the cause of freedom everywhere. ...read more.