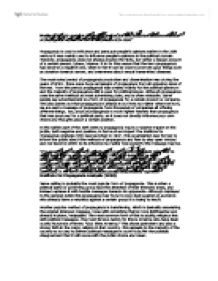 Media: "Critically evaluate the techniques used in the production and dissemination of propaganda in print an film in the period 1933-2000" Propaganda is used to influence and persuade people's opinions earlier in the 20th century it was mainly used to influence people's opinions in the political domain. However, propaganda does not always provide the facts, but rather a biased account of a certain person / place / stance. It is for this reason that the term propaganda has become a negative one, when in fact it can be used to promote good things such as donation towards cancer, and awareness about s****l transmitted diseases. The most noted period of propaganda production and dissemination was during the years of WW2. There were huge campaigns of propaganda from all opposing sides of the war. From this period propaganda was created mainly for the political spectrum and the majority of propaganda still is used for political issues. Although propaganda uses the same methods as most advertising does, and is often mistaken. Some people say advertisement is a form of propaganda for a certain product or company. This also points out that propaganda is always in our lives no matter where we turn, we are sent a message of propaganda from thousands of companies all offering different things. ...read more.

This shows patriotism and also a strong faith in the major religion in that country. This appeals to the majority of the country so is used to deliver political messages in order to buffer the possibly disagreement that it will cause with the public choice and ideas. Propaganda techniques are very simple, but can be very effective. They can range from a small play on words, or completely 'brainwashing' an audience. Some people say that Adolf Hitler was a brilliant propaganda creator as he released absolute masses of propaganda which made a majority of a nation vote him into office and respect and agree with his extreme ideologies. The most popular techniques used by propaganda however are, euphemisms, name-calling and 'glittering generalities.' Image A Image A is a WW2 German propaganda poster. This was aimed at the general German public. The text on the poster reads: 'As hard as we fight for it, you should labour for victory.' The German propaganda of WW2 was largely focusing on the national pride emotion, basically stating 'be a patriot and fight / work for your country.' This ran along the lines of the political ideas that Adolf Hitler enforced. ...read more.

Propaganda and advertising are very similar, but there is one thing that separates them both fundamentally. That is the use of gimmicks. Advertising has been known in the past and the present to use a certain phrase, or character in their adverts which does not have anything to do with the companies' product, but soon becomes very popular and associated with the product its self, such as the Santa Claus that the Coca-Cola Company uses. But the majority of the time it is a humorous character(s) such as the "Phones 4 U" cast, who are very out of the ordinary and show no relation with the company at all yet they are all remembered. Propaganda does not use such gimmicks but, they rely on more on the catchy phrases that are mass printed on posters in various designs. More popular ones where: "Loose lips sink ships," and "Coughs and sneezes spread diseases." Propaganda is always around us in everyday life, it plays a mass role in what products we buy, what we like and what we don't like. This amazing, almost brain washing tool is only down to messages and images that play on the publics emotions. It has been used for nearly 200 years and has crumbled nations and built nations. Propaganda is a powerful tool which can be used in anyway, with positive and negative effects. ...read more.