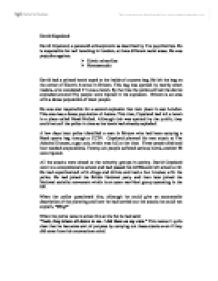 David Copeland, a paranoid schizophrenic as described by five psychiatrists. He is responsible for nail bombing in London, at three different racial areas.

David Copeland David Copeland, a paranoid schizophrenic as described by five psychiatrists. He is responsible for nail bombing in London, at three different racial areas. He was prejudice against: > Ethnic minorities > Homosexuals David had a primed bomb taped to the inside of a sports bag. He left the bag on the corner of Electric Avenue in Brixton. This bag was spotted by nearby street traders, who wondered if it was a bomb. By the time the police arrived the device exploded around fifty people were injured in the explosion. Brixton is an area with a dense population of black people. He was also responsible for a second explosion that took place in east London. ...read more.

Twenty-six people suffered serious burns, another 53 were injured. All the attacks were aimed at the minority groups in society. David Copeland went to a comprehensive school and had passed his GCSEs and left school at 16. He had experimented with drugs and drinks and had a few brushes with the police. He had joined the British National party and then later joined the National socialist movement which is an open neo-Nazi group operating in the UK. When the police questioned him, although he could give an accountable description of the planning and how he had carried out the attacks he could not explain, "Why?" When the police came to arrest him at his flat he had said: "Yeah, they where all down to me. ...read more.

His actions could be explained with Adorno's theory, due to the harsh upbringing and environment that he was brought up in. he could have been in harsh situations where he might have had experienced the harshness of the environment himself where people might have been prejudice or behaved inappropriately to him. These actions could be a reflection of those bad memories, or it could be his repressed feelings from his childhood being expressed on the minority groups. The social identity theory could also be used to explain his actions. He could have considered the minority groups as the 'out' group and his feelings and emotions had grown to such a stage that he wanted to murder the particular people and wanted them out of the country. When he had joined the national socialist party this could have motivated him more to this idea. ...read more.