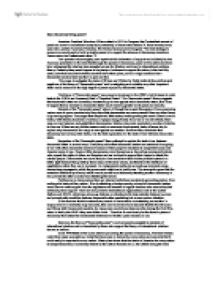 Does democracy bring peace? American President Woodrow Wilson stated in 1917 to Congress that "a steadfast concert of peace can never be maintained except by a partnership of democratic nations."1 Some seventy seven years later, another American President, Bill Clinton famously told Congress "The best strategy to ensure our security and to build a durable peace is to support the advance of democracy elsewhere. Democracies don't attack each other." 2 Two speeches almost eighty years apart but this declaration of support and solidarity by two American presidents for the idea that through the spread of democracy, peace will be achieved shows how widespread the idea has been accepted across the Western world and in international relations theory. Certainly there would appear to be plenty of evidence to support this claim, in the last fifty years, more than conflicts between countries have taken place, not on a single occasion has a democratic country faced another in open warfare. This essay investigates the claim of Wilson and Clinton by firstly looks at the positives and negatives of the theory of "democratic peace" and investigating as to whether any other important factor could account for the high degree of peace enjoyed by democratic states. The theory of "democratic peace" was properly developed in the 1980's, but its traces its roots back to the 1790's and Immanuel Kant's "Perpetual Peace". The "democratic peace" theory suggests that democratic states are incredibly reluctant to go to war against other democratic states, thus it can be argued that an increase in democratic states would result in greater world peace and security. Students of the "democratic peace" school of thought have spent thousands of hours analyzing various wars to prove conclusively they claim that democracies are more peaceful than any other forms of governing regime. They argue that despite the 20th century ranking among the most violent in world history with literally hundreds of millions of people dying directly from war or its side effects; there were no wars between well-established democracies. ...read more.

They argue that even if evidence does suggest that there is less likelihood of war between two democracies, it is absolutely impossible to guarantee that such a thing would never happen. R.J. Rummel has attempted to answer this question by stating that "All predictions are based on the past"4 and because the past has shown that democracies have not gone to war he can justify his argument. Realists have also attempted to explain the lack of war between democracies from 1945 onwards by suggesting that because of the bipolar system of global control that saw the United States and the Soviet Union battle for supremacy up until the demise of Communism in Russia in the early 1990's, many democratic countries have avoided possible conflict because they feared the USSR more than they feared another democratic country. As Kenneth Waltz wrote "A bipolar world tends to be more peaceful than a multipolar world."5 While "democratic theorists" accept that the Cold War may have accounted for the lack of war between democracies, it does not explain why there have not been wars between democratic states before or since, while in Europe, unity has continued to grow rather then hostility. One argument Realists use against the "democratic peace" theory is that democracies themselves are not entirely free of violence as the continued troubles in Northern Ireland and French massacres in Algeria have shown. However "democratic peace" theorists argue that on average democracies have much less violence than other forms of government, regarding examples of democracies with "high" levels of internal violence, one can easily point to cases of much more deadly violence within non-democracies. The Teiping Rebellion in China during the 19th century may have killed 20,000,000 people, even possibly 40,000,000. The Mexican Revolution near the beginning of our century left about 2,000,000 dead, the Chinese Civil War that was fought from 1928 to 1949 and killed at least 10,000,000 Chinese. ...read more.