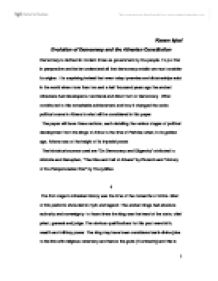 Evolution of Democracy and the Athenian Constitution

Kasem Iqbal Evolution of Democracy and the Athenian Constitution Democracy is defined in modern times as government by the people. To put that in perspective and better understand all that democracy entails we must consider its origins. It is surprising indeed that even today tyrannies and dictatorships exist in the world when more than two and a half thousand years ago the ancient Athenians had developed a functional and direct form of democracy. What contributed to this remarkable achievement and how it changed the socio-political scene in Athens is what will be considered in this paper. The paper will have three sections, each detailing the various stages of political development from the kings of Attica to the time of Pericles when, in its golden age, Athens was at the height of its imperial power. The historical sources used are "On Democracy and Oligarchy" attributed to Aristotle and Xenophon, "The Rise and Fall of Athens" by Plutarch and "History of the Peloponnesian War" by Thucydides. 1 The first stage in Athenian history was the time of the monarchs of Attica. Most of this period is shrouded in myth and legend. The ancient kings had absolute authority and sovereignty. In those times the king was the head of the state, chief priest, general and judge. The obvious qualifications for this post were birth, wealth and military power. The king may have been considered semi-divine [due to his link with religious ceremony and hence the gods (Trumbach)] and this is why even in the later times his successor, the King Archon, was entrusted with the performance of the most sacred religious rites as his chief responsibility. The question then arises that what caused a change in this state of affairs? For the answer we have to take a broader look at the Hellenic world. Honor was a competitive concept in Greek society. This held true not only for individuals but also for the highly competitive city states or poleis. ...read more.

In the sixth stage do we see the first bloom of real democracy as Cleisthenes (an Alcmeonid) comes to power. His method of doing so is an important indicator of how far Athenian democracy had come from the time of kings. He was in competition with Isagoras who had the support of the aristocracy since they were averse to the idea of an Alcmeonid tyranny (Trumbach) after the Pisistratid one. Therefore Cleisthenes turned to the people for support and won it by promising them greater control in the affairs of the state and curtailing of aristocratic privileges. Isagoras in response to this called in the Spartans to help him win control but in fact lost it when the people revolted against the imposition of his rule. Cleisthenes, who had been exiled, returned as a champion of the people (his celebrity was partly due to his family's role in the overthrow of tyranny and because of his forceful personality). The reforms and social changes that he made were the most significant steps in towards the democratization of the Athenian state. He first revamped the political map of Attica. Cleisthenes established a new system of 10 tribes instead of the traditional four. He began by dividing Attica up into 30 geographical sections or trittues (literally: threes). These 30 trittues were allocated by region, with 10 in the city, 10 covering the coastal regions, and 10 covering the inland regions. Each of the 10 tribes was comprised of one trittus from each of these three disparate regions (Aristotle, p: 164). One can speculate that this was done in order to break the power of the traditional aristocratic families who held sway over the various major regions of Attica. It can be argued that since voting was tribe based these families had considerable influence over it but now as the tribe was redefined this would be prevented. Proof of this influence can illustrated by considering the facts presented before regarding the aristocrats who led the peoples of the Hill, Plain and Shore in Solon and Pisitratus' times. ...read more.

a particular family or group dominating an office) than with ensuring competence of various officials. In the fully matured democracy all state officials (with the exception of the strategoi) were appointed by lot from the general populace. The possibility of another Pisistratus arising in such a political climate, where power was so diluted, was extremely low. To further guard against the rise of the tyrant, the practice of ostracism was instituted as well and used rather indiscriminately by the assembly. The archons and the Council derived from them had lost most of its executive and judicial authority as observed in the third section. The strategoi had (since they were elected and thus most definitely aristocrats) had acquired most of this authority. But it is obvious from the lives of Pericles and Alcibiades that the strategoi, while still influential, enjoyed no particular authority over the ekklesia which could easily remove them from command when displeased. The boule was equally democratic since members were selected from the citizenry by lot ensuring a fair chance of appointment. Since any citizen could address the ekklesia and, if persuasive, formulate state policy certain individuals gained particular authority through the popularity of their policies or the force of their personalities. These were either aristocrats with training in oratory and sophism (and hence manipulation of people) or demagogues seeking to incite the public. These factors often undermined the efficacy democracy and subjected it to the whims of the influential. Perhaps this was what contributed to an extent to the Athenian defeat. The popular courts were also instrumental in the functioning of a viable democracy though in the last few stages they were often misused for political ends. The aristocrats knew that, eventually, they could find themselves brought before a popular jury and condemned, less for their actions or any based on any solid evidence than for their politics or general reputation. The lives of Pericles and especially Alcibiades are clear illustrations of this fact. 1 ...read more.