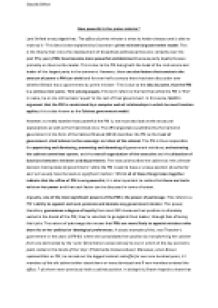 How powerful is the Prime Minister?

﻿Claudia Clifton How powerful is the prime minister? Lord Oxford once judged that, ?The office of prime minster is what its holder chooses and is able to make of it.? This idea is best explained by Crossman?s prime ministerial government model. This is the theory that: since the development of disciplined political parties and, certainly over the past fifty years; PMs have become more powerful and dominant because party loyalty focuses primarily on them as the leader. This is due to the PM being both the head of the civil service and leader of the largest party in the commons. However, there are also factors that constrain the amount of power a PM can wield and for over half a century there has been discussion over whether Britain has a ?government by prime minister.? This is due to the idea by some, that the PM is a ?primus inter pares,? first among equals. This term refers to the fact that while the PM is ?first? in name, he or she still remains ?equal? to the rest of their government. In this sense, Smith?s argument that the PM is constrained by a complex web of relationships in which he must function applies, this is also known as the Cabinet government model. However, to really examine how powerful the PM is, we must also look at the structural explanations as well as the theoretical ones. ...read more.

All of these elements of her leadership led to Hennessey to detail that she ruled her cabinet with an iron hand. This domination of her cabinet lends her style of leadership to the prime ministerial model. Furthermore, a PM may dominate their cabinet by bypassing in completely. A prime example of this was when Blair didn?t consult with or listen to his cabinet over the building of the Millennium Dome and more importantly the Iraq War. Moreover, the PM also has the power to choose the secretary who takes notes at cabinet meetings, and is able to use this to their advantage. Thatcher, for example, sometimes eliminated the opposition to her policies from cabinet meetings and then claimed that her entire cabinet had agreed on said policy. Therefore, it?s quite simple for the PM to bypass their cabinet. Alternatively, rather than bypass the principle of meeting with ministers completely, a PM may consult with a single minister or small group through the use of bilaterals or kitchen cabinets. Although, this does mean that the cabinet is consulted with much less frequently. This method was popularised by Blair, who was well known for his use of bilaterals and credited with the creation of the kitchen cabinet, so called because he would hold meetings with his ministers in his kitchen. ...read more.

Furthermore, ?bad? news stories can leave a PM?s reputation in tatters. For instance, the ?cash for Cameron? scandal which significantly weakened the Conservative?s popularity in the polls, lessening the public?s confidence in Cameron as a leader. Moreover, Cameron?s seemingly unpopular position on press regulation and the BSKYB revelation has somewhat reduced Cameron?s public standing. To conclude, the question of how powerful a PM is, in my opinion, really depends on which PM we?re talking about because I believe that this kind of power is immeasurable on such a generalised basis. However, if I had to comment on our current PM, David Cameron, I would say that I don?t think he wields as much power as former transformative PM?s such as Thatcher and Blair did. This is due to the coalitional nature of his administration which is bound by the coalition agreement that insists on frequent deference over decisions between himself and the deputy PM Nick Clegg. As well as, the necessity for longer cabinet meetings to ensure compromise and a sense of complacency within the core executive, means Cameron?s model of government certainly leans itself toward a more cabinet style of leadership and this seems fitting as Cameron declared before the last general election that he ?wanted a more collective style of policy making and decision taking, building a strong team and trusting his colleagues to get on with the job.? ...read more.