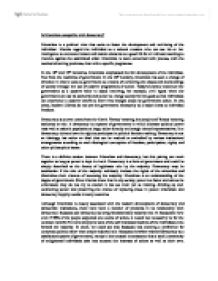 Is Liberalism compatible with democracy?

Is Liberalism compatible with democracy? Liberalism is a political view that seeks to foster the development and well-being of the individual. Liberals regard the individual as a rational creature who can use his or her intelligence to overcome human and natural obstacles to a good life for all without resorting to violence against the established order. Liberalism is more concerned with process, with the method of solving problems, than with a specific programme. In the 18th and 19th Centuries, Liberalism emphasised the full development of the individual, free from the restraints of government. In the 20th Century, Liberalism has seen a change of direction in that it looks to government as a means of correcting the abuses and shortcomings of society through the use of positive programmes of action. Today's Liberals would see the government as a positive force in issues involving, for example, civil rights when the government can use its authority and power to change society for the good so that individuals can experience a positive benefit to their lives brought about by government action. In this sense, modern Liberals do not see the government necessarily as a major threat to individual freedom. ...read more.

In other words, there is nothing about democracy per se that guarantees freedom rather than a tyranny of the masses. The coinage Liberal democracy suggests a more harmonious marriage between the two principles than actually exists. Liberals strive after the replacement of absolutism by limited government; a government by consent. The idea of consent suggests a democracy. At the same time, the founders of the first Liberal democracies feared mob rule, and so they built into the constitutions of Liberal democracies checks and balances intended to limit the power of government by dividing those powers among several branches. For Liberals, democracy is not an end in itself, but an essential means to secure Liberty, individuality and diversity. Liberals have expressed reservations about democracy, not just because of the 'tyranny of the masses' but also because of the make-up of the majority in modern societies. J.S. Mill was very precise when he stated that political wisdom is not equally distributed, and that it is largely related to education. The uneducated are more liable to act according to narrow class interests, whereas the educated are able to use their wisdom and experience for the good of others. ...read more.

The liberal element in liberal Democracy is the belief in limited government, the idea that the individual should enjoy some protection from the subjective action of public officials. The democratic element represents the fact that the government should be accountable to the people which it represents. Liberal Democracy tries to restrict or regulate government intervention in political, economic and moral matters affecting the population. Liberal Democracy also tries to increase the scope for religious, political and intellectual freedom of citizens. It questions the demands made by vested interest groups seeking special privileges. Liberal Democracy tries to develop a society open to talent and which rewards citizens on merit, rather than on rank, privilege or status. Possibly the most important factor is that it tries to maximise the well-being of all or most citizens. Liberalism is compatible with democracy as long as democracy does not fall into a 'tyranny of the masses' or a 'rule by the mob' society in which some minority needs are not cared for. A suitable compromise is Liberal democracy, which helps people gain the individual freedom they wish to have so that they can pursue their self-interest, and at the same time makes sure that government does not become too powerful, because of all the checks and balances which have been put into place. ...read more.