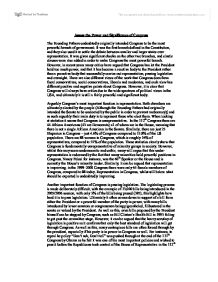 Power and Significance Of Congress

Assess the Power and Significance of Congress The Founding Fathers undoubtedly originally intended Congress to be the most powerful branch of government. It was the first branch defined in the Constitution, and they also used it to settle the debate between smaller and larger states over representation. It was given significant checks on the other two branches, and elastic clauses were also added in order to make Congress the most powerful branch. However, in recent years many critics have argued that Congress has let the President hold too much power, and that it has become a reactive body to the President rather than a proactive body that successfully carries out representation, passing legislation and oversight. There are also different views of the work that Congress does from fiscal conservatives, social conservatives, liberals and moderates, and each view has different positive and negative points about Congress. However, it is clear that Congress will always have critics due to the wide spectrum of political views in the USA, and ultimately it is still a fairly powerful and significant body. Arguably Congress's most important function is representation. ...read more.

As well as this, even bills proposed by the President himself can be stopped by Congress, such as Bill Clinton's Health Bill in 1993 failing to get past the committee stage. However, it can be argued that the heavy scrutiny of legislation is positive as it confirms that only the best standard of legislation will get through Congress. As well as this, many centrepiece bills are often forced through by the president, especially if his party is in power in Congress as well. For instance, to repeal he policy "Don't ask, Don't tell" was pushed through at the end of the 111th Congress by Obama as he felt it was one of his most important policies and wished to pass it before the Republicans took control of the House of Representative in the 112th Congress, after the midterms. Another example of this is Obama's healthcare reform, which was passed 56-43 in the Senate and 219-212 in the House after Obama had used the "Nuclear Option" of the budget reconciliation procedure to prevent the loss of a cloture vote in the Senate. ...read more.

Fiscal conservatives will argue that Congress passes too much legislation that encourages and forms costly programmes and initiatives that the country does not need, such as No Child Left Behind (implemented by Bush) and Obama's fiscal stimulus. Fiscal conservatives want small government, with increased oversight on domestic policy (and less on foreign policy) and a reduced legislative function, and as such support gridlock. However, social conservatives will argue that the government has a role to play in encouraging moral values in society, and as such they will support a strong legislative function on certain issues along with increased oversight. Liberals on the other hand, will argue that Congress needs to be more active in promoting new legislation in order to protect the disadvantaged and those who can not help themselves, and as such support social programmes like Obama's healthcare reform. Similarly, Liberals support increased oversight on both foreign and domestic grounds, arguing the "American Exceptionally" is not a valid concept, something that conservatives will tend to disagree with. Finally moderates will be fairly please with Congress, arguing that it reacts quickly in crisis while scrutinising effectively when possible, carefully considering the issues. As such it is clear that there are multiple views, and there is not necessarily a right answer, and instead it will differ depending on your political view. ...read more.