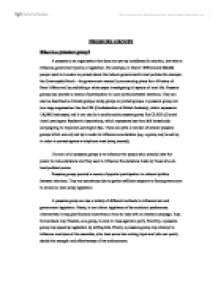 PRESSURE GROUPS What is a pressure group? A pressure is an organisation that does not put up candidates for election, but tries to influence government policy or legislation. For example, in March 1998 around 300,000 people went to London to protest about the Labour government's rural policies for example the Countryside March - the government reacted by announcing plans for a Ministry of Rural Affairs and by publishing a white paper investigating all aspects of rural life. Pressure groups also provide a means of participation in local politics between elections. They can also be described as interest groups, lobby groups or protest groups. A pressure group can be a large organisation like the CBI (Confederation of British Industry), which represents 150,000 businesses, and it can also be a smaller scale pressure group like CLARA (Central Area Leamington Resident's Association), which represents less than 300 households campaigning to improve Leamington Spa. There are quite a number of smaller pressure groups which are only set up in order to influence one decision (e.g. a group may be set up in order to protest against a telephone mast being erected). ...read more.

work overtime or be fired, no seating for staff, staff sitting while taking a break are physically abused and the wage for this injustice �8 a week Fiona King from save the children says the 'No child labour, No sweatshop slogans' of GAP are just a marketing gimmick. After the investigation aired Nike who also manufactured at the factory, they said they would sort out the problems in their factory and would send the children to school and pay for them to study and GAP said they would not do this and dismiss them. Saipan is one example, it is the furthest USA territory away from the main land as such all it's products can display 'Made in the USA, many workers are exploited and have to sign 'shadow' contracts which take away many of their human rights and don't allow them to get married or some even to fall in love, taking away many of the rights granted to anyone on US soil. GAP has broken child labour laws in Indonesia, China, Thailand, Cambodia, Philippines, and Mauritius. The parent firm of GAP, the Fischer family, own one of Americas largest logging firms, they have currently received a contract for logging in one of the ...read more.

In addition, the settlement calls for retroactive relief, payments to garment worker class members whose rights were violated in the past. With the 18 companies, one of the few companies who haven't settled is GAP, they are trying to escape the possibility of paying a settlement and are fighting the case in the court, the pressure group Gapatistas are trying to make sure GAP take notice of them and are informing consumers about the effect this is having on the workers and the child labour being exploited. The companies that have settled include: � Calvin Klein, Inc. � Polo Ralph Lauren Corp. � Tommy Hilfiger U.S.A., Inc. Those that have not yet settled include: � GAP Inc. � Levis Successes They have been successful in some ways by reducing the overall profits of gap and these methods have meant gap have had to take some notice. Though this has helped, the majority of the public are unaware of gaps illicit trading and remain loyal shoppers. Staff are trained that to reply to questions with pre set answers such as 'No gap doesn't use sweatshops' and the company proudly displays its fair trade code of conduct. Also its official website www.gapinc.com features a large section on the company's workforce and its manufacturing procedures and how it doesn't use child labour further influencing loyal customer's views. ...read more.