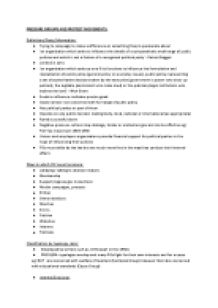 ﻿PRESSURE GROUPS AND PROTEST MOVEMENTS: Definitions/Facts/Information: 1. Trying to campaign to make a difference on something they're passionate about 2. 'an organisation which seeks to influence the details of a comparatively small range of public policies and which is not a faction of a recognised political party' - Robert Baggot 3. Limited in aims 4. 'an organisation which seeks as one if its functions to influence the formulation and implantation of public policy (general policy on everyday issues), public policy representing a set of authoritative decisions taken by the executive (government in power who draw up policies), the legislate (parliament who make laws) or the judiciary (legal institutions who enforce the law)' - Wyn Grant 5. Seeks to influence- indicates precise goals 6. Goals narrow- not concerned with full range of public policy 7. Not political parties or part of them 8. Operate on any public decision making body- local, national or international (as appropriate) 9. Rarely successful alone 10. Negative pressure- actions may damage, hinder or embarrass gov and can be effective eg: Poll Tax movement 1989-1990 11. Unions and employers organisations provide financial support for political parties in the hope of influencing their policies 12. PGs must abide by the law but are much more free in the way they conduct their internal affairs Ways in which PG's exert pressure: 1. Lobbying- talking to decision makers 2. Membership 3. Support/oppose gov in elections 4. Media- campaigns, protests 5. Strikes 6. Demonstrations 7. Marches 8. Sit-ins 9. Petition 10. Websites 11. Internet 12. Petitions Classification by typology- aims: 1. ...read more.

Government support/attitude: 1. Govs are more likely to be influenced by large numbers of their own potential voters and to be less sympathetic to those who don't support them eg: 1980s Conservatives were unsympathetic to the unions but more sympathetic to homeowners 2. PGs which can expect better treatment from one party than the other: CONSERVATIVES LABOUR National Farmers' Union Confederation of British Industry Institute of Directors Anti-European groups Trade Unions Caring professions Pensioners Pro-European groups 1. Success/failure depends on gov in power 2. Some groups likely to gain sympathy from the Lib Dems eg: groups supporting constitutional reform, those who campaign for the protection of individual rights, open gov or environmental protection and can be disadvantaged by the two main parties 1. Finance: 1. Crucial factor- but controversial 2. The availability of funds doesn't necessarily reflect the numbers of members or the justice of a particular argument eg: the worry over the financial muscle of large companies, such as the tobacco industry, gas and electricity companies, brewers and car manufacturers 3. Use of funds- 4. To finance political parties in return for sympathetic treatment 5. To mount expensive campaigns to win public support ie: it is often claimed that gov refusal to ban all cigarette advertising or to end the brewers' virtual monopoly on public houses is because of lobbying by tobacco companies and brewers 6. Raise awareness eg: ASH changes in attitudes 7. Less money- lower profile 1. Organisation: 1. New PGs have no public profile, usually lack funds and have yet to establish links with gov bodies 2. ...read more.