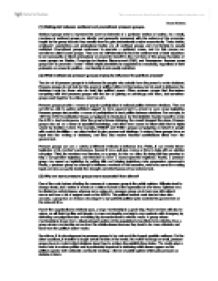 (1) Distinguish between sectional and promotional pressure groups. Sectional groups seek to represent the common interests of a particular section of society. As a result, members of sectional groups are directly and personally concerned with the outcome of the campaign fought by the group because they usually stand to gain professionally and/or economically. Trade unions, employers' associations and professional bodies are all sectional groups and membership is usually restricted. Promotional groups endeavour to promote a particular cause, and for this reason are sometimes called 'cause' groups. They are not self-interested in that the achievement of their objectives is not necessarily of direct professional or economic benefit to the members of the group. Examples of cause groups are Shelter, Campaign for Nuclear Disarmament (CND) and Greenpeace. Because cause groups aim to promote a cause - which might potentially be supported by everybody, regardless of their profession or economic position - membership is not usually restricted. (2) What methods do pressure groups employ to influence the political process? ...read more.

Fourth, a pressure group may speed up legislation by writing bills and helping legislators make progressive agreements. Finally, a pressure group my attempt to influence members of the executive, who have some law making input and who can partly decide the strength and effectiveness of law enforcement. (3) Why are some pressure groups more successful than others? One of the main factors effecting the success of a pressure group is the public opinion. Attitudes tend to change slowly, but a series of events or a crisis may lead to the expression of new views. Opinions may be divided on certain issues, whereas some values of a pressure group are in harmony with cultural norms and have a lot of support such as the RSPCA. The political context must also be taken into account; a group has an obvious advantage if a sympathetic political party controls the government at the relevant time. Even if the organisation is relatively poor, a large membership is a great help. ...read more.

But even with these qualities, successful pressure groups must be wary of the strength of the opposition. Even a relatively large pressure group, such as CND in the 1980's could make little headway against well-organised opponents with committed supporters in the media A pressure groups situation within this area can often affect whether they are going to be successful in their acts. Insider groups often tend to be favoured in influencing decisions as are informed of what is going on around them by the government, which means they can then act on this information. Outsider pressure groups normally have to find information on their own and because they are rarely addressed by the government they have to commit unlawful acts such as protests in order to get themselves heard and noticed. There are also many other factors that can help a pressure group to promote its ideals to the government and the public. Unfortunately the largest factor is probably money as most groups rely on membership subscriptions and donations, but these funds can dry up easily. Emma Billsdon ...read more.