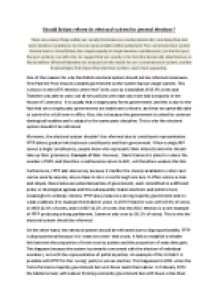 Should Britain reform its electoral system for general elections?

﻿Should Britain reform its electoral system for general elections? There are various things within our society that make our country democratic, one being free and open elections enabling us to choose representation within parliament. The current electoral system that we have in Great Britain, the simple majority in single member constituencies, (or the first past the post system), has left critics to suggest that our country is far from the democratic ideal that we so like to believe. What will therefore be analysed are the merits for our current electoral system, and the disadvantages that make other electoral systems seem more appealing. One of the reasons for why the British electoral system should not be reformed is because First Past the Post ensures a stable government as the system favours larger parties. This is shown in the 1979 election where the Tories won by a landslide of 43.9% votes and Thatcher was able to carry out all her policies with ease since she had a majority in the House of Commons. It is usually that a single party forms government, and this is due to the fact that since single party governments are stable and cohesive, and they are generally able to survive for a full term in office. ...read more.

This happened in 1951 when the Tories formed a majority government but won fewer seats than Labour. In February 1974 the tables turned, with Labour forming a minority government but with fewer votes than the Conservatives. Another reason for why the electoral system should be reformed is because of systematic bias. The disproportionality isn?t random; certain parties do well in the elections while others suffer. One of the examples of bias is the size of the party, large parties benefit at the expense of small parties and this happens because the ?winner takes all?. This means that 100% of representation gained in each constituency is done by a single candidate, and therefore by a single party. Plus, the winning candidates tend to come from large parties, as these are parties whose candidates are most likely to be ?first past the post? in the sense of plurality support. But for candidates from smaller parties than come for instance, fourth in the election, win nothing and gain no representation for their party. And voters are discouraged from supporting smaller parties because they know that they are unlikely to win any seats (The Greens, UKIP, BNP for example) ...read more.

It can lead to adversarial politics or the domination of one party. It creates a large number of safe seats, which means that many votes are wasted. There is a limited voter choice and voters cannot choose between candidates of the same party. Votes in Constituency's are not of equal value because it depends on whether it is a safe or marginal seat. Representation is disproportionate because some constituencies are larger than others. There are also reasons against electoral reform such as clear electoral choice. First past the post aids democracy because it clarifies the choices available to votes. It offers voters a clear and simple choice between potential parties of government, each committed to a different policy. First past the post also established a strong and reliable link between a representative and his or her constituency. In first past the post voters get what they vote for and winning parties have the ability to carry out their manifesto promises. First past the post also ensures that governments can govern. Coalition governments are wear and fairly ineffective because they have to seek legislative support by two or more parties. Single party governments are stable and cohesive and so are generally more able to survive for a full term in office. This is because the government is united by ideological loyalties whilst coalition governments are often wek and unstable. ...read more.