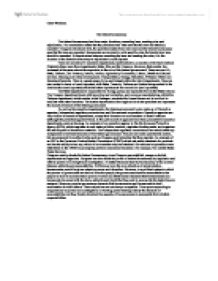 The federal bureaucracy has three major functions; executing laws, creating rules and adjudication. The constitution states that the president shall 'take care that the laws be faithfully executed'. Congress

A related dilemma faced by bureaucracy is the conflict between authority and accountability. If efficiency were the only objective of administration, bureaucracies would be given extensive power and discretion. However, in a political system in which the powers of government are derived from the people, the government must be accountable to the people for how it exercises those powers. On the one effectiveness demands that bureaucracies and bureaucrats be armed with the tools, authority and flexibility they need to accomplish the tasks they are assigned. However, popular governance demands that bureaucracies and bureaucrats be held accountable for their actions. These objectives are not always compatible. Time spent responding to congressional inquiries and investigations or holding public hearings satisfy the demands of accountability, but they directly diminish the capacity of bureaucracies to accomplish their allotted responsibilities. ?? ?? ?? ?? Clara Widdison ...read more.