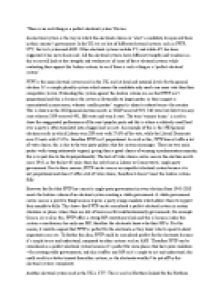 There is no such thing as a perfect electoral system Discuss.

﻿?There is no such thing as a perfect electoral system? Discuss. An electoral system is the way in which the electorate choose or ?elect? a candidate to represent them in their country?s government. In the UK we see lots of different electoral systems such as FPTP, STV, the List system and AMS. Other electoral systems include SV, and while AV has been suggested it has never been used. All the electoral systems have different strengths and weaknesses; this essay will look at the strengths and weaknesses of some of these electoral systems while evaluating them against the Jenkins criteria, to see if there is such a thing as a ?perfect electoral system?. FTPT is the main electoral system used in the UK, used at local and national levels for the general election. It?s a simple plurality system which means the candidate only needs one more vote than their competitors to win. Evaluating this system against the Jenkins criteria we see that FPTP isn?t proportional and this is because the system is favourable to larger parties as their support is concentrated in more areas, whereas smaller parties? support is almost scattered across the country. This is shown in the 2010 general election results as UKIP received 919, 546 votes but didn?t win any seats whereas SNP received 491, 386 votes and won 6 seats. ...read more.

For this reason, it could be argued that FPTP is perfect for the electorate as they know who to speak to about important issues etc. To further this idea, FPTP could be considered perfect for the electorate because it?s simple to use and understand, compared to other systems such as AMS. Therefore FPTP can be considered as a perfect electoral system because it?s perfect for some places that have poor coalitions ? for creating stable governments, and also it offers one MP so it?s simple to use and understand; this could result in a better turnout than other systems, as the electorate wouldn?t be put off by this electoral systems complexity. Another electoral system used in the UK is STV. This is used in Northern Ireland for the Northern Ireland Assembly elections and it is a multi-member constituency, PR system. STV has two main features: the electorate vote by ranking their candidates in order of preference and also the votes are counted using the ?droop quota?, By evaluating STV against the Jenkins criteria we see that this is extremely proportional ? more so than FPTP. This is evident as in 2007 the DUP gained 36 seats with 30% of the vote and also it has been predicted that if STV had been used in the 2010 general elections the Liberal Democrats would have won 162 seats. ...read more.

Furthermore, the list system doesn?t lead to a stable government because coalitions are usually formed ? as previously mentioned this is likely to be a negative outcome of the system, and so causes the List system to be shown as imperfect. On the other hand, the List system is a lot more proportional than the other systems and this is because it doesn?t have a threshold, so it?s easier for smaller parties to gain seats in larger regions. This is a positive outcome of the List system because it is more democratic than the other systems due to more people?s views being represented. Even though this is a positive effect of the system, in the past extremist parties have gained seats, for example the BNP won two seats in the EU parliament, with 2.1% of the vote. This could cause political tension and also lead to public tension/violence; the fact that the list system is more proportional can be seen as a good and bad thing. Therefore, judging by the evidence given above, I conclude that there is no such thing as a perfect electoral system because it is hard for one to meet the entire Jenkins criteria, however there is a perfect electoral system for every country, region, situation or political ideology. ...read more.