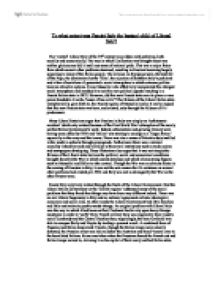 To what extent was Fascist Italy the b*****d child of Liberal Italy?

To what extent was Fascist Italy the b*****d child of Liberal Italy? The 'United' Liberal Italy of the 19th century was ridden with problems, both socially and economically. The way in which Unification was brought about was neither glorious nor did it instil any sense of national pride. This was a major factor from which several other problems stemmed, resulting in Fascism becoming hugely appealing to many of the Italian people. The reliance on foreign powers, the hostility of the Pope, the domination by the 'Elite', the rejection of Southern Italy's problems and a fear of socialism all generated a social atmosphere in which extreme politics become attractive options. It was Mussolini who effectively manipulated this charged social atmosphere and moulded it to suit his own political agenda resulting in a Fascist Italian state in 1922. However, did this new Fascist state earn its place or was power handed to it as the 'lesser of two evils'? The failures of the Liberal Italian state metaphorically, gave birth to, the Fascist regime of Mussolini and so it can be argued that this new Fascist state was born, and existed, only through the failures of it's predecessor. ...read more.

during this period, often killing hundreds of people with each disaster. Giolitti's poor response to a major earthquake in Messina in 1908 was blamed for the high number of deaths. Also the poor management of the aftermath of the Messina earthquake infuriated southern Italians who claimed that Giolitti favoured the rich north over them. This was argued further when the Liberal state attempted to unite the country economically by abolishing internal tariffs and attempting to set up a single Italian market. What this actually did was harm the industry in the South (though there was little of it), as it could not compete with the advanced north. Furthermore the rapid growth of northern industry at the end of the 19th century reinforced the economic divide. The wealth distribution in the south was extremely unbalanced meaning there was a constant state of unrest and tension between the peasants and the landowners - 0.01% of the population of the South owned 50% of the land! The 'Southern Problem' didn't simply go away when Fascism was introduced as the Southerners were so out of touch politically, many didn't even know Fascism was introduced. ...read more.

But this was not the case and the First World War further highlighted the weakness of the Italian military with more humiliating defeats. The Liberal Italian state was a pleasant thought, a united Italy brimming with national pride in its unity and the memory of their powerful Roman ancestry seemed like an almost perfect scenario. Unfortunately things aren't always perfect, just as Liberal Italy's failures effectively represent. The Government's failures paved the way for Fascism by disenfranchising it's own people, alienating the South, failing to give the Italy people anything to be proud in and humiliating itself in front of the other world powers whom Italy was so desperate to impress. Mussolini offered just what the Liberal Government couldn't: pride. This was desperately important to the Italian people and by humiliating it's own country the Liberal Government doomed itself to failure. However it is not correct to say that Fascism was the only path that the Italian people could have followed. Socialism also reared its head and demanded attention and support, which it did receive. Socialism and Fascism walk hand in hand in all politically unstable countries and to say that Fascism was an only child would be a lie, as it's brother Socialism, could have taken it's place. ...read more.