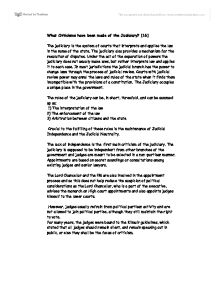 What Criticisms have been made of the Judiciary?

What Criticisms have been made of the Judiciary? [16] The judiciary is the system of courts that interprets and applies the law in the name of the state. The judiciary also provides a mechanism for the resolution of disputes. Under the act of the separation of powers the judiciary does not usually make laws, but rather interprets law and applies it to each case. In most jurisdictions the judicial branch has the power to change laws through the process of judicial review. Courts with judicial review power may annul the laws and rules of the state when it finds them incompatible with the provisions of a constitution. The Judiciary occupies a unique place in the government. The roles of the judiciary can be, in short, threefold, and can be summed up as; 1) ...read more.

However, judges usually refrain from political partisan activity and are not allowed to join political parties, although they still maintain the right to vote. For many years, the judges were bound to the Kilmuir guidelines, which stated that all judges should remain silent, and remain speaking out in public, or else they shall be the focus of criticism. In 1988 Lord Chancellor Mackay allowed some relaxation of these rules though, to allow judges to give interviews. One Judge, Judge Pickles, took extensive advantage of this opportunity. The next criticism of the judiciary would be the lack of neutrality. Although all the Judges are meant to refrain from politically partisan activity, it can be argued, such as Griffith did, that the social and educational background of the majority of judges means that they will be biased towards the government of the day, and in particular, the conservative party. ...read more.

Usually, judges possessed a great deal of discretion when sentencing, however this posed problems such as inconsistent sentencing and excessive leniency, meaning that it was not equal. This perception of leniency encouraged the government to attempt to impose a greater deal of control over the sentencing policies in courts. Therefore what we see from the examples is evidence of how the judiciary is under criticism in the modern era. It is often seen as not fulfilling its primary functions as a result of political interference and it is blamed for allowing this to happen. It is criticised because of its social, political, ethnic and gender make-up as being unrepresentative of modern Britain and as a result loses its impartiality and independence to some extent. There is also a lack of accountability in the appointment process. ...read more.