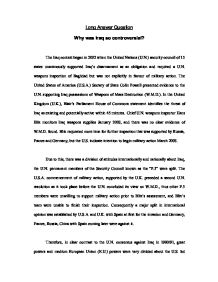 Why was Iraq so controversial?

The Iraq context began in 2002 when the United Nations (U.N.) security council of 15 states unanimously supported Iraq’s disarmament as an obligation and required a U.N. weapons inspection of Baghdad but was not explicitly in favour of military action. The United States of America (U.S.A.) Sectary of State Colin Powell presented evidence to the U.N. supporting Iraq possessions of Weapons of Mass Destruction (W.M.D.). In the United Kingdom (U.K.), Blair’s Parliament House of Commons statement identifies the threat of Iraq as existing and potentially active within 45 minutes. Chief U.N. weapons inspector Hans Blix monitors Iraq weapons supplies January 2003, and there was no clear evidence of W.M.D. found. Blix requested more time for further inspection that was supported by Russia, France and Germany, but the U.S. indicate intention to begin military action March 2003.

Due to this, there was a division of attitudes internationally and nationally about Iraq, the U.N. permanent members of the Security Council known as the “P.5” were split. The U.S.A. commencement of military action, supported by the U.K. preceded a second U.N. resolution as it took place before the U.N. concluded its view on W.M.D., thus other P.5 members were unwilling to support military action prior to Blix’s assessment, and Blix’s team were unable to finish their inspection. Consequently a major split in international opinion was established by U.S.A. and U.K. with Spain at first for the invasion and Germany, France, Russia, China with Spain coming later were against it.

Therefore, in clear contrast to the U.N. consensus against Iraq in 1990/91, great powers and medium European Union (E.U.) powers were very divided about the U.S. led campaign. Between 2003 and 2007, Bush and Blair strongly justified their decision of removing Saddam Hussein, even when W.M.D. was not found post invasion. In the UK, the Conservative opposition also supported the war along with the Labour led Government.

The main opponents were President Chirac of France and Zapatero of Spain were notable heads of government which criticised the conflict as both illegal and counterproductive for stability in the region as it was likely to cause a long and high fatality war. In addition, within states, notably in the U.S.A. and U.K publicly opposed, the then Senator Obama and the Liberal Democrats respectively. Therefore, the Iraq issue caused intra and inter-state disagreement and international dispute, especially in the U.K. where there were “Stop the war” protests organised, and the Leader of the House of Commons, Robin Cook resigned from the cabinet in 2003.

In conclusion, after coalition forces intervened, the internal situation became unstable for a prolonged period, Saddam Hussein was captured and later executed by the new Iraq government but security for Iraq citizens greatly deteriorated, there was a number car bombs and inter-community violence escalated. Therefore a new democracy without adequate safety is of questionable value, this post-invasion chaos and no discovery of W.M.D. which was the main justification for war that caused much criticism of the “Bush-Blair policy” after 2003. Specific to the U.K., Blair’s “45 minute” warning caused a major row between the government and British Broadcasting Corporation (BBC). This related to how accurately the government had presented intelligence information in 2002 until early 2003. In 2011 senior U.K. generals suggested the intelligence dossier from the government was one-sided, to ‘make the case’ for war.

Internationally, in the U.S.A. presidential campaign of 2008, candidates Clinton and Obama publicly disagreed about the U.S.A. policy as both senators had voted on opposite sides for and against invasion respectively. Furthermore, in 2011, the 2003 Iraq conflict remains hotly disputed as Bush and Blair stand by their decision to remove a dictator while other opinions consider the policy as a failure and an illegal war. In the U.K. there is on-going inquiry into the start of the war that is due to publish its findings in late 2011.