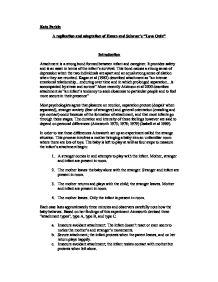 Kate Parkin A replication and adaptation of Hazan and Schaver's "Love Quiz" Introduction Attachment is a strong bond formed between infant and caregiver. It provides safety and is an asset in terms of the infant's survival. This bond causes a strong sense of depression when the two individuals are apart and an equal strong sense of elation when they are reunited. Kagan et al (1982) described attachment as "an intense emotional relationship...enduring over time and in which prolonged separation...is accompanied by stress and sorrow" More recently Atkinson et al 2000 describes attachment as "an infant's tendency to seek closeness to particular people and to feel more secure in their presence" Most psychologists agree that pleasure on reunion, separation protest (despair when separated), stranger anxiety (fear of strangers) and general orientation (crawling and eye contact) occur because of the formation of attachment, and that most infants go through these stages. The duration and intensity of these feelings however are said to depend on personal differences (Ainsworth 1973; 1978; 1979) (Isabell et al 1989). In order to test these differences Ainsworth set up an experiment called the strange situation. This process involves a mother bringing a baby into an unfamiliar room where there are lots of toys. The baby is left to play at will as four steps to measure the infant's attachment begin: 1. A stranger comes in and attempts to play with the infant. Mother, stranger and infant are present in room. 2. The mother leaves the baby alone with the stranger. ...read more.

This research is also correlational which prevents a clear cause and effect being found. Although it is probable that an individual's childhood relationship to their parents might have some part in how they act in love relationships, it may not be the only cause. Also the attachment types were based on retrospective biased opinions, and thus the actual relationship may not be anything like the participant said. However this experiment has been supported many times by Brennan and Shaver (1998) and Kirckpatrick and Davis (1994) Aim: The aim of the experiment is to test whether attachment styles help set a basis for older adult relationships, and whether any discrepancies in results is down to separation or discordance in early childhood. A strong positive correlation that attachment to adult relationships is down to attachment to parents was found by Hazan and Schaver. The experimenter will adapt the statements from the Hazan and Shaver's "love quiz" questionnaire, and will change the rating table so that it is easer to quantify. A non directional two tailed hypothesis will be used. Hypothesis: An infant's attachment to their mother affects how they act in adult love relationships, therefore the answers given in the first section of the questionnaire, when quantified, will be equal to the answers given in the second part, unless there are any explanations, given in the third part, of why this might not be so. For example, death in early childhood. Null Hypothesis: How strongly an infant is attached to their mother has no bearing on their adult relationships they are completely unrelated. ...read more.

The first two were questions on separation, the next were blanket statements about their parents relationship towards each other. Procedures Participants were approached in Ashford High Street and asked whether they could spend five minutes helping with a questionnaire that involved a maximum of twenty five questions. If they agreed, a list of standardised instructions were read out, (these can be found in appendix A). If they agreed to continue they were told the study is designed to test relationships about their partners and their parents. They were assured there data was confidential and that they could withdraw at any time. The participant was not given a time limit to complete the questions, as it is designed to test personal views and memories. After the participant had completed the questionnaire they were told about the attachment theory and that the experiment was designed to help test the validity of this, they were then asked if they would like to withdraw. They were thanked for their help. In order to get the most effective and easy to read correlation the experimenter drew up a table that replaced the participant's ratings of the first two sections with numbers. These numbers ranged from -4 to +4 in a sequence of two. The -4 were for the answers that were concurrent to insecure attachments and the +4 were for answers concurrent to the secure attachments, the 0 score were for the neither disagree or agree answers. These scores were then added up for both variables, and each part was plotted on a scattergram. ...read more.