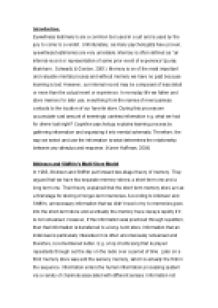 Analyse the Studies into the Accuracy of Eyewitness Testimony

Transfer-Encoding: chunked ﻿Introduction. Eyewitness testimony?s are a common tool used in court and is used by the jury to come to a verdict. Unfortunately, as many psychologists have proven, eyewitness testimonies are very unreliable. Memory is often defined as ??an internal record or representation of some prior event of experience??(purdy, Markham , Schwartz & Gordon, 2001). Memory is on of the most important and valuable mental process and without memory we have no past because learning is lost. However, our internal record may be composed of less detail or more than the actual event or experience. In everyday life we father and store memory for later use, everything from the names of new business contacts to the location of our favorite store. During this process we accumulate vast amount of seemingly useless information e.g. what we had for dinner last night? Cognitive psychology explains learning process by gathering information and organizing it into mental schemata. Therefore, the way we select and use the information is what determines the relationship between any stimulus and response. (Karen Huffman, 2004) Atkinson and Shiffrin?s Multi Store Model In 1968, Atkinson and Shiffrin put forward two-stage theory of memory. They argued that we have two separate memory stores; a short-term one and a long term one. Their theory explained that the short term memory store act as a first stage for storing of longer-term memories. ...read more.

The last group was a controlled group and was not asked any question about the speed of the cars. The results of the study proved that the wording of the question had affected the recall of the motor accident. The first groups mean estimate of the cars? speed was 10.5 mph whereas the second groups mean estimate was 8.0 mph. Loftus and palmers study proves that eyewitness evidence can be easily distorted by information presented subsequently and can be altered by manipulation. However, many researchers have questioned this interpretation, arguing that misleading subjects simply leads them to question their original memories. Loftus and Palmers study lacked ecological validity as all the participants were young and had very little or no driving experience prior to the experiment. The importance of Lawyers and police officers knowledge on leading question is very crucial. Leading questions can cause the witness to recall the incident differently and reconstruction of memory in order for the new information to fit into event, resulting in an unreliable eyewitness testimony.(McCloskey and Zaragoza, 1985) Cognitive interviews. Psychologists have tried to design techniques to improve memory retrieval. In 1985, psychologist Geisselman founded a cognitive interview involving the use of four key concepts to improve eyewitness recall. Theses included; recreating the context of the incident, recalling every detail, viewing the situation from a different point of view other than your own and to report the incident using a different order of event. ...read more.

There are two types of cue that help recall, context and state. Researchers suggest that recall will be best when an individual tries to recall the information in the same environment that they learned it in, this is know as context dependent memory e.g. when a student tries to recall information in an exam, they will be better at recalling in an environment which is similar to the exam environment. (Godden Baddeley, 1975). State dependent memory is where an individual?s physical state can influence and recall information e.g. state cues included, happiness, fear and sadness etc.(Michael W.Eysenck, 2000). In conclusion, many studies and cases have proven that false convictions came down to unreliable eyewitness testimony. Eyewitness testimony can refute or support the overall facts of cases however; details of testimony?s should not over rule the actual evidence presented in court. Eyewitness testimony can be affected by leading question, level of anxiety or stress when the event took place, age, the presence of weapons and reconstructive memory. All theses factors should be taken in to consideration when an eyewitness testimony is presented. In the recent years, psychological research into eyewitness reliability and memory has resulted in an improvement in CIT used by police and the awareness of court leading questions. However, an increase in depth of training given to interviewees about theses factors and more psychological research on eyewitness testimony will help improve and eliminate theses factors. ...read more.