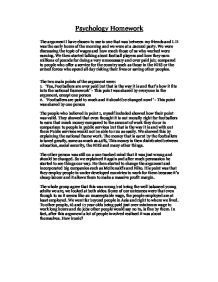 Analysis of an argument

The argument I have chosen to use is one that was between my friends and I. It was the early hours of the morning and we were at a Jacuzzi party. We were discussing the topic of wages and how much those of us who worked were earning. We then started talking about football players and how they earn millions of pounds for doing a very unnecessary and over paid job; compared to people who offer a service for the country such as those in the NHS or the armed forces who spend all day risking their lives or saving other peoples.

The two main points of the argument were:

1.   ‘Yes, Footballers are over paid but that is the way it is and that’s how it fits into the national framework’ - This point was shared by everyone in the argument, except one person

2.   ‘Footballers are paid to much and it should be changed now!’ - This point was shared by one person

The people who believed in point 1, myself included showed how their point was valid. They showed that even thought it is not morally right for footballers to earn that much money compared to the amount of work they do or in comparison to people in public services but that is the way it is and with out them Public services would not be able to run as easily. We showed this by explaining the national frame work. The money that is earnt by the footballers  is taxed greatly, some as much as 40%, This money is then distributed between education, social security, the NHS and many other things.

The other person was still on a one tracked mind that it was just wrong and should be changed. So we explained it again and after much persuasion he started to see things our way. He then started to change the argument and incorporated big companies such as McDonald’s and Nike. His point was that they employ people in under developed countries to work for them because it’s cheap labour and it allows them to make a massive profit margin.

The whole group agree that this was wrong but being the well balanced young adults we are, we looked at both sides. Some of our outcomes were that even though to us it seems like an unacceptable wage, the people employed are at least employed. We went far beyond people in Asia and right to where we lived. To other people, 16 and 17 year olds being paid just over minimum wage to work long hours and do jobs other people would say no to, is fine by them. In fact, after this argument a lot of people involved realised it was about themselves. How ironic?