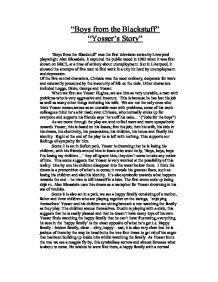 "Boys from the Blackstuff" "Yosser's Story" 'Boys from the Blackstuff' was the first television series by Liverpool playwright Alan Bleasdale. It captured the public mood in 1982 when it was first shown on BBC2, at a time of anxiety about unemployment. Set in Liverpool, it showed the attempts of five men to find work in a city hit hard by unemployment and depression. Of the five central characters, Chrissie was the most ordinary, desperate for work and constantly pressured by the insecurity of life on the dole. Other characters included Loggo, Dixie, George and Yosser. When we first see Yosser Hughes, we see him as very unstable, a man with problems who is very aggressive and insecure. This is because he has lost his job as well as many other things including his wife. We are not the only ones who think Yosser comes across as an unstable man with problems, some of his work colleagues think he's a bit mad; even Chrissie, who normally sticks up for everyone and supports his friends says 'he's off his cake...' ("Jobs for the boys") As we move through the play we tend to feel more and more sympathetic towards Yosser, this is based on his losses; first his job, then his wife, his kids in his dream, his electricity, his possessions, his children, his house and finally his identity. ...read more.

Normally the autograph given to Yosser would be for a child, but here we see Dustin smiling in the background at the delight on his dad's face in receiving the autograph. This almost becomes a role reversal. In scene 24 Yosser meets the Wino. Yosser starts talking but the Wino isn't listening, it doesn't even look as though he cares, he's much too interested in his 'disinfectant'; 'leave my disinfectant alone'. Yosser tells him about his dream and how he used to build sandcastles; 'I built sandcastles, and sometimes I think that's all I've ever done'. I think that Yosser means he tries his best at everything but in the end they just collapse over and over again just like waves going over a sandcastle and collapsing. As a child Yosser's life was full of dreams and ambition. He had so much planned for his life ahead of him. He thought there was so much to look forward to in life. It's ironic really, his life was full of dreams but now it's quite clearly not. He has nothing. I think Yosser is feeling sorry for himself, he feels he hasn't accomplished anything in his life. For example his job, wife and friends have all collapsed and disappeared, because of this, his outlook of life has changed, he has no dreams anymore. ...read more.

The scene when he breaks the window makes us realise that. We can't see how he will survive without his children. Yosser says: 'I thought I knew where I was going once. I did. But there's nowhere left to go cos its all...' this makes us realise that he tries but somehow he never manages it. I think after reading 'Yosser's story' or indeed watching it, the audience is left with a number of thoughts about the story. They feel more sympathetic towards the people who are on the dole and understand them more and the troubles that they go through. It is said that Yosser was 'more sinned against than sinning'. I think there are good comparisons in this play like the family scene; this shows a life that Yosser wanted to have. There are also scenes that in other situations we wouldn't feel sorry for him, but because of all that's happened to him, we do feel sympathy towards him. We also look up to him in a way because he's got certain aims in life like wanting to look after his children. We see that this is hard for him, but we still want it to work for him so that he's happy. So, overall we see Bleasedale manipulating us to feel sorry for Yosser, because we are almost blocked from looking at the story from another point of view. ...read more.