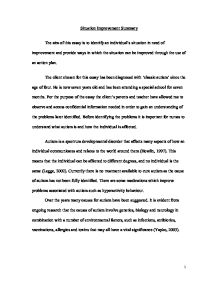 case study, an individual's situation in need of improvement - autism

Situation Improvement Summary The aim of this essay is to identify an individual's situation in need of improvement and provide ways in which the situation can be improved through the use of an action plan. The client chosen for this essay has been diagnosed with 'classic autism' since the age of four. He is now seven years old and has been attending a special school for seven months. For the purpose of the essay the client's parents and teacher have allowed me to observe and access confidential information needed in order to gain an understanding of the problems later identified. Before identifying the problems it is important for nurses to understand what autism is and how the individual is affected. Autism is a spectrum developmental disorder that affects many aspects of how an individual communicates and relates to the world around them (Howlin, 1997). This means that the individual can be affected to different degrees, and no individual is the same (Legge, 2002). Currently there is no treatment available to cure autism as the cause of autism has not been fully identified. There are some medications which improve problems associated with autism such as hyperactivity behaviour. Over the years many causes for autism have been suggested. It is evident from ongoing research that the causes of autism involve genetics, biology and neurology in combination with a number of environmental factors, such as infections, antibiotics, vaccinations, allergies and toxins that may all have a vital significance (Yapko, 2003). The physical dysfunction of the brain causes the inability to interact with other human beings and communicate their needs and not, as once thought the result of emotional disturbance caused by inadequate mothering (Yapko, 2003). Viral encephalitis before birth or in early childhood has also been implicated as a cause of autism. Good epidemiological evidence argues that the Measles, Mumps and Rubella (MMR) vaccine is not an environmental risk factor for autism (Nursing Times, 2003). ...read more.

The overall diagnosis is made using criteria found in the Diagnostic and Statistical Manual (DSM-IV) of the American Psychiatric Association or the International Classification of Diseases (ICD-10). In order to be diagnosed with an autistic spectrum disorder a person must have at least six of the possible twelve diagnostic statements with at least two from the area of social impairments and at least one from each in the areas of communication and behaviour (Yapko, 2003). From observing the client within the school environment I have chosen two main problems that need to be improved, both regard the issue of eating. Firstly the child has a very poor appetite and refuses to try new foods. If he is asked to try them he starts crying. This causes disruption for others trying to eat their meal. Secondly, he will only pick certain types of food which are limited in range, such as chicken nuggets, chips and mars bars, all of which could compromise his health. In order to develop an action plan it is important that the nurse understands her role in eating and nutritional issues when dealing with autistic children. As I have included a lot of information in the essay the plan will be placed in the appendices (see appendix one), along side the techniques of managing the problem (see appendix two). The 'Charter of Rights for Persons with Autism' (1992) states that the client and their family have a right to be involved in all decisions affecting their future and their wishes must be respected. It is also advised by the Department of Health (2001) that 'children with autism are children first and their needs as children should be the main focus.' The nurse needs to understand the psychological profile of autism, and know how to encourage healthy eating alongside meeting the needs of the family as a whole, whilst working together with other professionals. ...read more.

As well as the health service the education service is just as important. Legge (2002) suggests that schools are able to support and help introduce new foods, monitor the child's behaviour and keep records to help parents and other professionals involved. Currently the client's school is very supportive and have a very good relationship with the client's parents. Although special diets are available for autistic children such as the gluten and casein free diet. The National Autism Plan for Children (2003) argue that restricting the diet of a child who already has rigid eating habits can lead to an exacerbation of feeding problems. Therefore I have decided not to include this in the action plan at this stage. If he develops a more healthy appetite and chooses more food then the diet could be used to eliminate some autistic behaviours. The roles of the professionals are to assist parents with concerns about eating and provide techniques how to overcome these. A systematic introduction of new foods and facilitation during meals on a routine basis may be appropriate. Most children with autism given patience and interventions are eventually able to establish socially appropriate behaviours around eating. Through the use of information provided in the essay and appendices the overall improvements can be evaluated through records, observations and questioning. If the child chooses different types of food this can also help suggest that the plan has worked. As a majority of children have used similar plans devised by feeding teams in hospitals it would be good to assume that this plan will work for the client. To conclude I feel that the aim of the essay has been achieved. I have improved the situation through the development of an action plan, supported this through biological, physiological and psychological explanations whilst reflecting on the role of the nurse and professionals needed to help the client. Obviously if the word limit was increased I would have included more evidence and arguments to support my judgements. ...read more.